Nick Longhi and Matt Plumb captured their first GS driving title with a third-place finish in the No. 13 Rum Bum Racing Porsche 997.

The triumph ended a difficult season for Roush Performance, with the team shut out of victory lane after opening the year by winning at Daytona International Speedway. In between, their lone top-five finish was second at Indianapolis Motor Speedway.

“I was a real big deal to get this victory,” Roush said. “It’s been a real tough year, and we had a lot of bad luck.”

It was the 10th career victory for Roush, and 15th for Johnson. They averaged 92.035 mph in the first CTSCC race to run without a full-course caution since 2009.

“Lime Rock has always been a special place for me, but I’ve never had great luck here,” Johnson said. “We should have won here two years ago before a backmarker took us out. The last 15-20 minutes were crazy. It all worked out to come down to the last lap or two. Matt raced me hard but clean and we were able to make a move around to the outside and hold on to win.”

The No. 9 Stevenson Auto Group Camaro GS.R ran among the leaders throughout the race. John Edwards passed Tonis Kasemets to take the lead in the No. 9 machine prior to the one-hour mark.

Bell took over and led 57 laps down the stretch. Bell and Johnson ran nose to tail throughout the closing minutes. Johnson managed to go side-by-side entering Turn 1 on the final lap, and then pulled ahead exiting Turn 3 the lone left-hand turn on the 1.5-mile circuit.

“It was only a matter of time,” Bell said. “It was getting very difficult to hold on over the closing laps.”

“Winning one of these championships is like getting struck by lightning it rarely happens twice,” Plumb said. “The fact that we’ve won it twice is testament for the team’s work from the top down all the way from (owner) Luis Bacardi and (crew chief) Joe Varde on down. This is a dream come true.”

Damien Faulkner and James Davison took fourth in the No. 7 TRG-AMR Aston Martin Vantage, followed by Charles Espenlaub and Trent Hindman in the No. 48 Fall-Line Motorsports BMW M3. Espenlaub was running in his 100th CTSCC career race, while 18-year-old Hindman started his fifth career race as the youngest pole winner in series history. 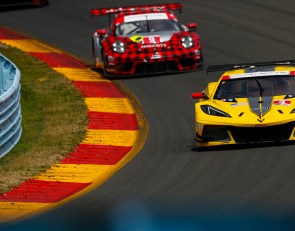 IMS in; Detroit, Mid-Ohio out as IMSA unveils 2023 schedule 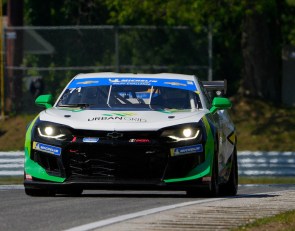 Rebel Rock on the rise in IMSA's Michelin Pilot Challenge