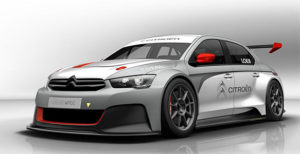 Citroen has revealed the C-Elysee WTCC with which Sebastien Loeb will compete in next year’s World Touring Car Championship.

The 380hp front-wheel drive machine is the first Citroen has produced for circuit racing, Citroen’s first track car, and the first of the new wave of vehicles produced to the series’ upgraded 2014 regulations. The car uses the same 1.6-liter engine as the DS3 WRC machine.

Having only unveiled the road version of the C-Elysee in September last year, Citroen said it was the obvious choice to use in the WTCC.

“Choosing the C-Elysee as the basis for our WTCC car reflects very clearly our determination to use racing as an active means of supporting our commercial development,” Citroen CEO Frederic Banzet said. “With rounds in Latin America, Morocco, China and Russia, the WTCC race calendar is genuinely global, and it will be a real advantage to run a C-Elysee, a key driver of our growth, in front of large crowds of enthusiastic motorsport fans.”

“From a strictly technical perspective, the choice of a three-box sedan body was ideal in terms of aerodynamics,” Citroen Racing technical director Xavier Mestelan-Pinon added. “Apart from this aspect, we were able to install the various components fairly easily. Insofar as this is our first track racing car, we constantly had to ask ourselves questions about the relevance of our choices, but that’s what makes this a particularly exciting challenge.”

While nine-time World Rally champion Loeb will spearhead Citroen’s 2014 attack, the firm has not yet made a decision on who will partner him in the likely three-car lineup. Citroen Racing team principal Yves Matton confirmed that Yvan Muller, Rob Huff and Alain Menu are all front-runners for a drive alongside Loeb. He also said he hoped to tempt Robert Kubica into a limited program.

Honda and Lada are understood to be developing their own models under the new 2014 regulations, while SEAT’s concept Leon Cup racer could be adapted and ready for use in the latter stages of 2014.