The NTT IndyCar Series has abandoned its plans to introduce its new hybrid 2.4-liter twin turbo V6 engine formula in 2024. No timeline has been given for if or when the 2.4L engines, which were meant to add 150-200hp through greater displacement and fresh concepts, might be used in the future.

In agreement with its manufacturer partners Chevrolet and Honda, the series will continue using the 2.2-liter twin-turbo V6 motors that were introduced in 2012, with the new addition of spec energy recovery systems originally conceived by MAHLE, starting in 2024.

Although IndyCar did not provide a reason for the parking of its new engine formula, RACER has learned one of the primary areas involved the extreme costs of developing the new internal combustion engines, coupled with a new and unanticipated need to help the series redevelop and mass-produce the ERS units, left both brands with the budget to support one or the other, but not both.

With Chevy and Honda committed to current or future hybrid and full-electric road cars, the brands chose to commit their budgets to electrification, which led to the halt of developing their respective 2.4-liter motors.

“We are most proud of the many advancements that the NTT IndyCar Series has made in leading the motorsports world toward a more sustainable future,” said series president Jay Frye. “The 2.2-liter IndyCar engines supplied by Honda and Chevrolet have provided the most competitive racing in the world. The 2024 hybrid engine package will provide even more excitement with horsepower increases over the current engine.”

The decision comes after Honda Performance Development conducted the first test of its 2.4-liter TTV6 with an ERS unit installed at the end of October. Chevrolet did not participate in the test, nor did it move its hybrid engine package into a track-testing phase.

“There has been good progress made on IndyCar’s hybrid system, we have covered several race distances to date in the prototype phase,” HPD president David Salters said in a quote requested by RACER. “It now needs to be further developed for production and our teams.  We are excited to be working and collaborating with IndyCar, Chevrolet and Ilmor on this. To do this in the current timeframe of development, we will keep the current race engine and focus our priorities and resources on collaborating on the new IndyCar hybrid system.

“Focusing on electrification and sustainability is certainly one of our key goals, our engineers and technicians are very motivated to work together and help move the hybrid system onto this next phase. We all have a lot to learn, but that’s exactly why we go racing: we actively search out the next challenge. The race car environment is extremely challenging. Typically, we strive to make things too small, too light and too powerful, then we make it work! That’s part of our DNA, we have learnt how to excel at this challenge.  We are excited to assist IndyCar with this challenge, along with Chevrolet and Ilmor, as we push forward to this new electrified hybrid era.”

“IndyCar has decided to have the manufacturers pause the 2.4L development so that all efforts can be placed on the hybrid system development,” the brand’s director of motorsports competition engineering said. “Continuing with Chevrolet’s proven 2.2L V6 will help facilitate that. Chevrolet is committed to a sustainable future in racing and supports the efforts IndyCar is putting into developing the series’ hybrid system.”

The next step in the processes of readying IndyCar for going hybrid in 2024 involves mating the ERS unit with the current 2.2-liter TTV6 motor. Testing in full hybrid configuration is expected to commence in the next month or so with both manufacturers taking an active role in the process throughout 2023.

With the new 2.4-liter engines in development, Chevy, through its engine partners at Ilmor Engineering, and Honda, through its HPD arm, ramped down their investments in the decade-old 2.2-liter engines as the pools of 50-60 motors in both camps were meant to fall silent at the end of next season.

It’s believed the concept of sticking with the 2.2-liter motors only gained serious momentum in recent weeks. Thanks to the long lead times associated with the production of large and complex items that form those engines, the series and its manufacturers were facing a pressing deadline to place the necessary orders to keep the 2.2-liter motors in motion after the 2023 season concludes. 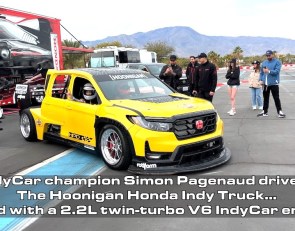