One week after igniting a maelstrom of controversy with his brutish tactics at Martinsville Speedway, Ty Gibbs held off charging Noah Gragson to win Saturday’s NASCAR Xfinity Series Championship Race and the series title that goes with it.

Starting from the pole, Gibbs won the first and second stages and led a race-high 125 of 200 laps, but those statistics belie how intensely competitive the race was.

Gragson and JR Motorsports teammate Justin Allgaier led 35 and 26 laps, respectively, and traded the lead with Gibbs as the sun went down and the track cooled.

But Gibbs’s No. 54 Joe Gibbs Racing Toyota was strong enough to win the day, giving the 20-year-old prodigy his seventh victory of the season and his 11th in 51 career starts.

Nevertheless, a large faction of the crowd greeted his victory celebration with catcalls and boos, the memory of the way Gibbs had wrecked teammate Brandon Jones to win last Saturday’s race at Martinsville still on top of mind.

“You know, what I did last week was unacceptable,” Gibbs said after climbing from his car. “And I apologize once again, but it was unacceptable because we could have had two shots to win this deal, and it was stupid from an organization standpoint. All my fault.

“I can sit here and tell you I’m sorry as much as I can, but it’s not going to fix it. I’ve got to fix my actions. I felt like today I had a good race, felt like I made some good moves. Me and the No. 7 (Allgaier) were racing really hard. I felt like hopefully we put on a great show for you guys, the fans, and thank you for all that you guys do.

With all the breathtaking side-by-side racing, lap after lap, the difference came down to performance on pit road. When the Championship 4 drivers pitted under the seventh caution on lap 160, an 18.8s stop dropped Gragson from third to eighth for a restart on lap 165.

Gibbs’ crew, in contrast, had its best stop of the day — 13.7s — and grabbed the lead from Allgaier off pit road.

After a subsequent caution for Brandon Jones’ spin off the bumper of Gragson’s No. 8 Chevrolet on lap 165, Gragson gained five spots on a lap 171 restart, soon passed Allgaier for second and launched a ferocious pursuit of the eventual race winner.

Gragson closed within two car lengths through Turns 3 and 4 with two laps left but couldn’t get to Gibbs bumper. He crossed the finish line 0.397s behind Gibbs.

“I gave it my best,” Gragson said. “I drove my (expletive) off and gave it everything I had. Just got beat…

“He (Gibbs) raced like a champion tonight. He deserved it.”

Championship 4 competitor Josh Berry was running in the top four in the late going but contact with the backstretch wall shortly after the final restart on lap 171 dropped him to 13th at the finish. 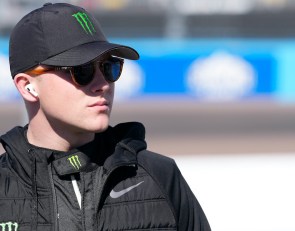 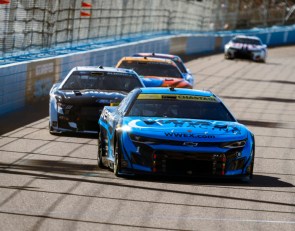