Argentinian GT racer Ezequiel Companc will make his Extreme E debut in the final round of the season, partnering Tamara Molinaro at XITE Energy Racing.

Companc, son of Jorge and nephew of Luis – both of whom have competed in the World Rally Championship and the Dakar Rally – takes the place of two-time DTM champion Timo Scheider, who competed for the team in Sardinia and Chile.

“I’m grateful for the opportunity to race in Extreme E and I am really happy to join XITE Energy Racing for the last round of the Extreme E Season 2 in Uruguay,” said Companc.

“It is an honor to be the first South American driver in the series and going racing in South America so close to my hometown of Buenos Aires, Argentina, in such a prestigious event makes it a special one for me.”

While the majority of his racing experience to date has been in GT cars in the likes of GT World Challenge Europe and ADAC GT Masters, Companc did recently sample electric rallycross machinery.

“Coming from GT Racing, the format, the car, and the track layouts of this series will all be new to me,” he said. “I am looking forward to learning from my experienced teammate Tamara and from my engineer, who I have already started preparing with for the Energy X Prix.

“Last month I had my first electric racing experience with an RX2e and had a lot of fun. Getting behind the wheel and taming the Odyssey 21 in such a short time will be a big challenge, but I am ready to take on the beast!”

XITE Energy has been a standout performer in Extreme E this season. After joining the team from the second round, Scheider helped it to its first final and first podium finish, vaulting it into title contention until it slipped out of the running following the most recent event. Scheider’s departure wasn’t an unexpected one, however, with him posting on social media after Chile that he would be stepping aside.

“No, I am not running away. But I will not take part in the Extreme E season final in Uruguay as a race driver for XITE Energy Racing,” he said. “I agreed with the team in case there is a pay driver turning up I will move. As I am a professional racer, I get paid for driving so I totally understand the case.

“This means I will be back on [the] side again as track designer and championship reserve driver. Bring on the final.”

Prior to joining XITE Energy Racing, Schieder was the series’ designated male reserve driver, a role that was filled by Nitro Rallycross driver Fraser McConnell in the interim. 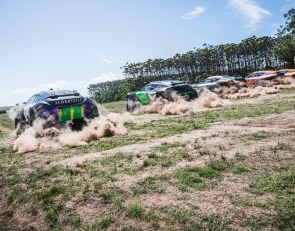