The 2021 IMSA WeatherTech SportsCar Championship DPi title fight went down to the wire, just as it did the year before. And while 2021 wasn’t a four-way fight to the finish, it was close – last lap, throw it in and drive it through the grass close. In last year’s Motul Petit Le Mans at Michelin Raceway Road Atlanta, Ricky Taylor did everything he could to get his Wayne Taylor Racing Acura by Felipe Nasr’s Action Express Racing Cadillac, because by doing so he would claim the championship for he and Filipe Albuquerque. He didn’t; he followed Nasr’s taillights across the finish, and Nasr and Pipo Derani were the 2021 champions.

The story could very much be the same on Saturday, only instead of an Acura vs. Cadillac battle, it’s the two Acura teams going head to head for the big prize. Tom Blomqvist, Oliver Jarvis and Meyer Shank Racing with Curb Agajanian are pursuing the WTR pair after leading the points on several occasions. They are in the fight thanks to consistency in the No. 60, with a win in the Rolex 24 at Daytona and five second-place finishes. WTR, on the other hand, has four victories for the No. 10, the most of any team this season, and a second at Daytona to lead the championship 3066 to 3047 – 19 points, the same margin Taylor and Albuquerque had last year.

That’s close. When the spread between any consecutive finishing position except first and second is 20 points, 19 is nothing.

Qualifying will play a huge role in the outcome since 10 percent of the points are awarded for qualifying. If MSR outqualifies WTR on Friday afternoon, all that matters is which team finishes ahead of the other, just like in 2021. If it goes the other way, Blomqvist and Jarvis, joined by Helio Castroneves for Petit Le Mans, will have to finish two places ahead of Taylor and Albuquerque – with Brendon Hartley as the third driver – to take the title, unless MSR wins. Have we mentioned that it’s close?

“I wish it would be more boring; it’s never been easy,” said Taylor, who enters the finale in the title fight for the third year in a row, winning with Castroneves for Penske in 2020. “It’s nice to have had the experience of being there before. Obviously, it’s really difficult to go into the last round of the championship fighting for the title, let alone it being 10-hour endurance race that already on its own is one of the most difficult races in the world. So just all that compounded together makes for quite the drama, and quite the stress for the teams and drivers. But I think it’s going to be a great show.”

Neither of the 2021 title contenders won last year’s race. That was Jarvis, sending Mazda out with a bang accompanied by Harry Tincknell and Jonathan Bomarito. But this is a different year in a different machine.

“It’s nice to know I’ve won it before,” Jarvis said. “So I know what it takes. But it’s a 10-hour race to finish the season. It’s a tough one. Anything can happen. You really just have to stay on track, stay out of trouble. And that’s not easy to do in these types of events. But as long as we prepare the best we can, put ourselves in the best opportunity we can… I believe we’ll have the pace to fight for the win and probably more importantly fight for the championship.”

Consistency is a good thing, and it’s kept MSR in the fight. But the consistent second-place finishes are a sore spot for them, especially since they were in a position to win many of them. Finishes such as Albuquerque making a bold move on the final restart at Watkins Glen, or Renger van der Zande coming on strong in the No. 01 Cadillac at the end of the Canadian Tire Motorsports Park event, left Jarvis and Blomqvist frustrated.

“I felt like most of the time, we were ahead and then they they got the opportunity and took it,” said Blomqvist. “So obviously, for me, a lot of the time it hurt, hurt like hell. Was I thinking big picture at the time? No, not really. We were leading the race, and then they got the better of us. They did a better job of managing those situations. So, yeah, it hurt. I think if a certain few things maybe didn’t play out the way the way they did, we’d be in a different position now with this championship. But everything’s kind of gone the way it has, so we just now need to deal with it in Road Atlanta.”

Blomqvist has turned in some stellar qualifying efforts this season, and whoever is in the No. 60 for qualifying will have to do so on Friday – while possibly dealing with the remnants of Hurricane Ian. Qualifying could very well change the nature of the championship fight during the race.

“At the moment we are not thinking even of the Cadillacs or thinking about winning the race; we are thinking to beat the best and see where we can end up, because if we’re going to defend, it’s not going to work. So we need to attack and for sure the 60, once again, will be around the top three all the time as they always are. So we need to be on our best game ever.” 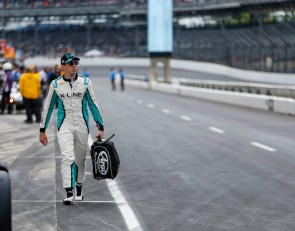 PRUETT: A salute to Dalton Kellett