The cool track, which had been sprinkled intermittently with rain throughout the day and endured another shower in the final 10 minutes, offered grip at a premium, but the Dutchman mastered the slick circuit to set a best time of 1m45.507s with his Red Bull. The only blot in his copybook was the stewards noting him for a potential practice start infringement when the cars lined up on the grid after the checkered flag, which at worst would likely lead to a reprimand.

Charles Leclerc was next quickest, but his Ferrari was 0.862s off the pace. The Monegasque’s only ameliorating excuse was that his car appeared to be making some unusual noises via the warning system that he asked the team to switch off.

Leclerc also took a new control electronics package for the session, though he was already set to start at the back of the grid thanks to taking new power unit parts and a new gearbox in FP1.

With the air temperature at 63 degrees F and the track a barely warmer 69 degrees F, Lando Norris and Lance Stroll were unlikely interlopers among the front-runners, lapping 1.1s off the pace and beating Carlos Sainz and Lewis Hamilton to third and fourth. The Mercedes cars in particular seemed to struggle to generate tire temperature — a season-long trait of the W13, which betrayed Hamilton with a massive lock-up into the first corner early in the hour.

Flat out at Eau Rouge on a slick surface 😮

Fernando Alonso finished seventh for Alpine and 1.4s off the pace, with George Russell following in eighth.

Daniel Ricciardo was ninth in the second McLaren, while Sergio Perez struggled to 10th, 1.8s slower than his session-topping teammate.

Alex Albon was impressive for Williams to sit 11th, beating Alfa Romeo’s Zhou Guanyu and both AlphaTauri drivers. Yuki Tsunoda pipped teammate Pierre Gasly, who resumed control of his car after reserve driver Liam Lawson took it for a spin in FP1.

Sebastian Vettel was 15th for Aston Martin and one of the few drivers to brave the wettest conditions late in the session. Esteban Ocon followed in 16th in what was effectively his first sessions of the weekend, having lost most of the first hour to a driveline problem.

Kevin Magnussen had his Haas equipped with a new battery on his way to 17th ahead of Valtteri Bottas, who had set no timed laps in the first hour owing to a power unit problem.

Nicholas Latifi was 19th ahead of Mick Schumacher, who propped up the table for Haas. 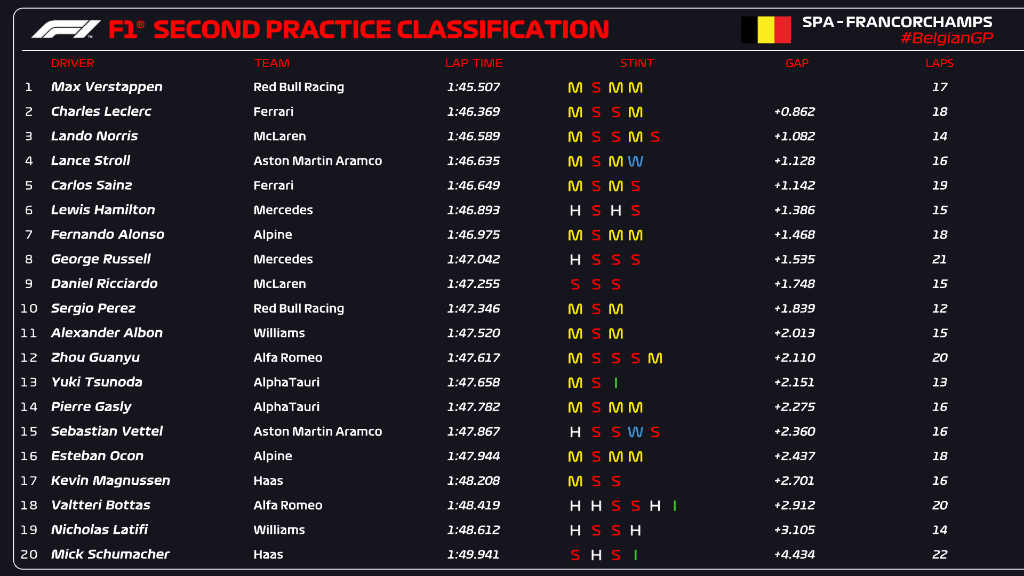