“That definitely was not a boring race,” Hughes said. “It felt like forever that Bryson was right behind me within attacking distance. I knew I couldn’t make any mistakes. That’s a tough point because they can attack and make mistakes and nothing happens to them, but as soon as you make a mistake, they’re on you. The first few laps were very tough, and then we were finally able to just bridge the gap. From then on, it was pretty smooth sailing.”

Setting the fast lap of yesterday’s race, Hughes once again secured the pole position for race two. The Australian jumped to the point position with a clean start in the No. 6 Jay Howard Driver Development / CSU One Cure / Lucas Oil / Pelican Ligier JS F4, but Morris was never far behind. In fact, Morris spent the first half of the race within a second of Hughes, but as the clock ticked down Morris started to see his teammate Ryan Shehan (No. 66 Crosslink Kiwi Motorsport Ligier JS F4) in the rearview mirror. Having already climbed from his sixth-place starting position, it looked like Shehan may get a run at his teammate for the second position with less than five minutes left on the clock. However, just like that, Morris found the extra push he needed to reopen the gap, and the three crossed the finish line in the same order they had run since before the halfway point – Hughes, Morris, Shehan.

Alex Berg narrowly missed the podium with his fourth-place finish in the No. 08 Doran-Kroll Competition Ligier JS F4. Rebounding from a tough race one. Noah Ping rounded out the top five in his No. 65 Velocity Racing Development JS F4.

Hughes strengthened his points lead with his fourth victory of the 2022 season to close out the New Jersey SpeedTour. Despite a highly-competitive field, he led every lap on track this weekend, but was credited with only two wins after his victory in race one was recalled due to a stewards’ decision.

“It was very tough out there,” said Hughes after climbing from his car. “This place is hard on tires, and that was the first time we used a set of tires that had already done a race. It was really difficult. Happy to bring it home for the win. It was tough at the start; Ryan [Shehan] was all over me, then it was red flagged and we had to do a safety car restart. I just reset, put my head down and did the job.”

The race three victory was anything but easy for Hughes, who found himself battling side-by-side on several occasions with the second-place finisher Shehan. Further back in the field, Berg, Morris, Gabriel Fonseca (No. 76 Crosslink Kiwi Motorsport Ligier JS F4) and Ping were putting on a show of their own.

Berg, Morris and Fonseca found themselves volleying positions, but contact ultimately removed Fonseca from the fight. Meanwhile, Berg and Morris continued to swap the third position until the halfway mark when Ping inserted himself in the battle. Ping ultimately overtook Berg to secure the fourth position, but wasn’t able to make it to third before the checkered flag waved.

As they crossed the line, it was Hughes in the lead by 0.914s, followed by Shehan, Morris, Ping and Berg. Crosslink Kiwi Motorsport teammates Shehan and Morris had perfect podium weekends, each making three podium appearances at NJMP.

F4 U.S. will be back on track October 6-9 for the Andy Scriven Memorial at the Mission Foods VIR SpeedTour. 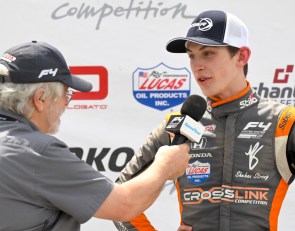