Casey Kirwan had to find a win to secure his spot in the playoffs. Zack Novak had finished second in three of the last four races. Naturally, when the two were nose-to-tail entering the final corner of Tuesday night’s race at the virtual Pocono Raceway, neither was eager to yield an inch of ground.

Kirwan dove to the inside of Novak and was alongside the 2019 series champion by the exit of the corner. Kirwan leaned into the side of Novak as they raced to the line. One final slam allowed Kirwan to gain the advantage as he slid underneath the checkered flag just 0.010s ahead of Novak in one of the closest and most memorable finishes in eNASCAR history.

After the race, Novak said he would not have done it the way Kirwan did and Kirwan agreed that it was not the way he wanted to do it.

“He did what he had to do. I would not have done it that way, but I wasn’t the one in position to make that decision, so it is what it is. It sucks, it really does,” Novak said.

Kirwan spoke highly of Novak after the race.

“It’s definitely not what I want to do, especially to someone like Zack, no one has ever raced me cleaner than Zack. Zack and I are good friends and there is no one I respect more than Zack. It’s the last person I want to do it to but unfortunately, in this format, all that matters is a win,” Kirwan said.

Kirwan explained that the multiple green-white-checkered attempts, the caution that flew inches before he took the white flag, and the fact that a Novak win would close off another playoff spot all combined to force him to race as hard as he did.

“Another thing that was a bit unfortunate is if it was Ottinger or Conti, or somebody who already had a win, it didn’t really affect me if they won. If Zack wins, it’s one more winner and I’m out… with one spot left and a road course and Darlington it would probably get filled.

“Another thing too, there was that one restart where I felt like I was pretty far past the start-finish line and the caution still came out and I feel like I had the race won at that point. I wasn’t going to lose the race after that, I didn’t care what it took,” Kirwan said.

With Kirwan’s win, nine winners have clinched their spot in the playoffs. Novak currently sits fourth in the standings and would make the playoffs as the tenth driver provided no other new winners join the party.

Novak admitted after the race that he would have nothing to say to Kirwan if given the chance, but he recognized that was likely a product of his emotional state after falling just short of the win.

“I probably wouldn’t say anything to him right now to be honest with you. I think that’s probably the best choice of everything — just let my emotions pass and let it be for a little bit. I’d say congratulations if I was forced to say something to him, but he did what he had to do,” Novak said.

Novak recalled the 2019 championship race at Homestead-Miami Speedway where he and Keegan Leahy battled for a number of laps for the championship. In that race, neither car made contact with one another, and the pair’s side-by-side battle through Turns 3 and 4 on the final lap is often cited as the most aggressive but fair racing the series has seen.

The respect that Novak and Leahy showed towards one another three years ago still serves as a guide for Novak, he explained.

“I wouldn’t race like that for a win just because of how Keegan and I raced three years ago. I always kind of think of that in the back of my head and I’m not really willing to race someone dirty for a win or what I deem is dirty just because that could’ve easily been me on the other side and I just don’t really like winning like that.

“I’m not I’m not trying to call out Casey or anything like that. I think what he did was fine. I think everyone’s circumstances are different. But just for me, I wouldn’t have made any contact there or very minimal contact. I don’t think I would’ve gotten quite as aggressive as he did,” Novak said.

The eNASCAR Coca-Cola iRacing Series heads to Watkins Glen next month where Bobby Zalenski and Mitchell DeJong will look to retake their crown as road course kings — and also shake up the playoff picture. 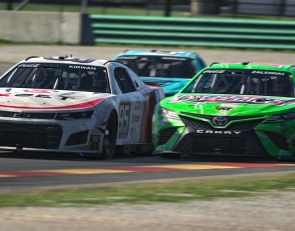