After some near-wins and several heartbreaking weekends, Christian Rasmussen is a race winner in Indy Lights Presented by Cooper Tires, scoring his first career win Sunday in the Indy Lights Grand Prix at Road America.

Danish driver Rasmussen beat his Andretti Autosport teammate Sting Ray Robb to the finish line by 2.3573s in the No. 28 Road to Indy/Stellrecht car.

To secure the win, Rasmussen made a move to the outside of Robb’s No. 2 Sekady car in Turn 1 on a lap 11 restart and never looked back. It was a similar move that he pulled on Robb on lap 1 of the 20-lap race.

Rasmussen, who won the 2020 USF2000 championship and the 2021 Indy Pro 2000 championship, led 18 of the 20 laps after starting third. The win came after he finished 13th in both races of the doubleheader last weekend at Detroit.

“It feels amazing,” Rasmussen said. “I think Detroit (last weekend) was the worst weekend of my life, so to bounce back with a win like this is definitely an amazing way to show everyone that we’re here and we’re able to compete for wins.”

Rookie Hunter McElrea drove to a strong third-place finish in the No. 27 Andretti Autosport car, holding off hard-charging championship leader Linus Lundqvist in the No. 26 HMD Motorsports with Dale Coyne Racing car over the final nine laps. Jacob Abel rounded out the top five in the No. 51 Abel Speedwagon.

The race featured three cautions on the day, the most notable of which came on lap 9 and resulted in a red flag and nearly four-hour break in the action.

Christian Bogle drove his No. 7 HMD Motorsports with Dale Coyne Racing car over the curb outside Turn 5. It lifted the front of the car into the catch fence, damaging the fence and requiring a red flag for extensive repairs. Bogle was unhurt during the incident and finished 12th.

The time needed to fix the catch fence forced the final half of the Indy Lights race to be postponed to after the NTT INDYCAR SERIES race at Road America, won by Josef Newgarden.

While pole sitter Robb couldn’t break his trend of being on the lower steps of the podium – he’s scored five podiums in seven races this season – he did inch ever so closer to points leader Lundqvist, who has had a dominating first half of the season.

After Lundqvist’s fourth-place finish, he’s still the Indy Lights points leader. Robb jumped from fourth to second in the standings, 82 points back of his Swedish championship challenger.

Rasmussen jumped one position to sixth in the championship, 115 points behind Lundqvist. While Rasmussen has been strong in his rookie Indy Lights season, he’s rarely had the finishes to show for it.

He was on his way to a win in the season-opening race on the Streets of St. Petersburg but a mechanical issue coming to the white flag prevented him from winning — he finished 12th. In the second race of the season at Barber Motorsports Park, and just last weekend in the Detroit doubleheader, Rasmussen had a strong car but contact prevented him from finishing better.

An 11th at Barber and 13th in both Detroit races last weekend made Sunday’s win all the sweeter as he redeemed himself and found Victory Lane on the 14-turn, 4.048-mile road course in Elkhart Lake, Wisconsin.

“It’s been coming,” Rasmussen said. “It’s been coming for quite a while. I’m just so happy I can give it to these Andretti Autosport boys. I feel like we’ve deserved it a few times now, so finally being able to do it is a great feeling.”

Indy Lights is back in action after a two-week break with the eighth race of the season, at 11:30 a.m. (ET) Sunday, July 3 at the Mid-Ohio Sports Car Course, live on Peacock Premium and INDYCAR Radio Network. 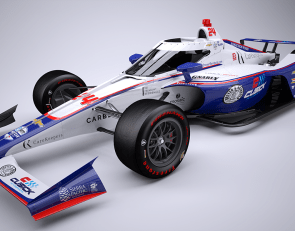