Jared Thomas (No. 96 JTR Motorsports Engineering) crossed the line less than half a second behind Thomas with nine laps in the books moments before the race was red flagged for lightning in the area. Matthew Dirks (No. 76 McCumbee McAleer Racing) converted his front row start into his debut series podium finish with his run to third at the line.

The field of 29 Mazda MX-5 Cup machines took the green flag under sunny skies for the opening race of the double-header weekend to mark rounds five and six of the 2022 championship season. A clean start ensued as runners jostled for position in the opening segment of the scheduled 45-minute race.

With some previous race winners and championship contenders starting the race deep in the pack, scores of passes saw the order continue to change from lap to lap. The caution flag flew for lightning in the area just nine laps into the race with a red flag coming shortly thereafter.

There was less than 30 minutes left on the clock, so a mandatory 30-minute wait time for conditions to clear per the IMSA weather safety protocol forced officials to wave the checkered flag early.

“I think the race was just kind of starting to develop when it got stopped,” said Wagner. “There was no rhyme or reason to the move that won it, it was just good luck that it happened before the red flag. I’ve lost races to full-course yellows and strange random occurrences. I’m a tough competitor and like tough competition, so this isn’t the most fulfilling win, but I was in first place at the right time so [I’ll] take it!”

“It is a bit weird to end the race early, and everyone wishes we could have run it out fully, but sometimes these things happen,” said Thomas. “You win some and lose some this way; just one of those deals with some weird circumstances but we will take it and move on to tomorrow!”

“It was kind of a weird way to get my first podium,” Dirks said. “I wasn’t expecting the red flag so I wasn’t as aggressive maybe at that stage, but the car was really good and I had a great push from my teammate, Justin Piscitell, (No. 89 McCumbee McAleer Racing) at the start. Thanks to my crew chief for the car. It was really good and I felt like I was just saving it for later.”

The Hard Charger Award went to Sam Paley (No. 28 McCumbee McAleer Racing) who started the race from the back of the field but picked up 19 positions and finished 10th.

Due to the shortened race distance, series officials announced that drivers will receive half of the usual points scored.

Dirks is provisionally on pole for Sunday’s round five race and shares the front row with Thomas. The race will go green at 11:15 a.m. ET and be live streamed on RACER.com. 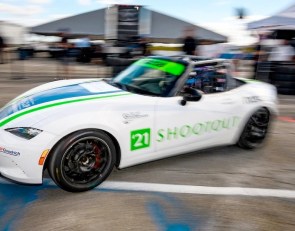 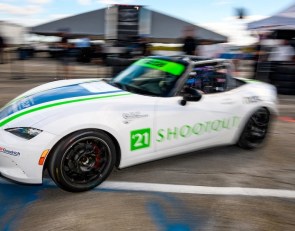