The fastest truck won Friday’s Dead On Tools 200 at Darlington Raceway, but not without much ado between the green flag and the checkers.

Pole winner John Hunter Nemechek fought through 10 cautions, an extra pit stop to tighten a loose wheel and a overtime restart to post his first NASCAR Camping World Truck Series victory of the season, holding off hard-luck Carson Hocevar by 0.552s in the two-lap shootout to the finish.

“Just a huge shoutout to all the guys that work on this No. 4 KBM Toyota Tundra,” Nemechek said after spinning his truck like a dervish in a celebratory burnout on the frontstretch.

“I thought we gave it away early, honestly, and we were able to rebound and battle back. I learned a lot tonight. I was finally able to bring home the first win of the year.”

Runner-up last fall at Darlington in a race he thought he should have won, Nemechek led a race-high 69 laps in his first triumph at the Lady in Black and the 12th time in his career. He qualified on pole, 0.432s faster than second-place qualifier Ty Majeski.

Clearly, Nemechek had the speed, but his victory was by no means assured after he brought his truck to pit road under caution for a second time on lap 61 to remedy a loose left-front wheel. That left Nemechek 26th for a restart on lap 63, but by the end of Stage 2 on lap 90 he had climbed back to fifth in the running order.

On lap 123, he passed Christian Eckes for the lead and held it the rest of the way, through the two final cautions and overtime.

Hocevar was the victor in Stage 2—the first stage win of his career—but he lost ground on pit road under caution for the stage break and ultimately recovered to restart side-by-side with Nemechek as the race exceeded the scheduled distance.

Nemechek had the advantage of the outside lane for the final two laps and pulled away to win by the half-second margin.

“A lot of emotions,” said Hocevar, who ran a close second to Ben Rhodes in the previous race on Bristol Dirt. “I was freaking out for a second. I had an electrical issue and every once in a while it would stumble, and it flat out shut off in the middle of [Turns] 1 and 2 coming to the white [flag]… 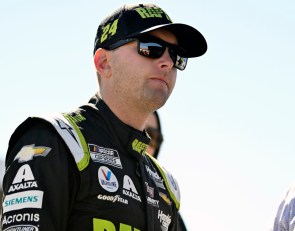