Trackhouse Racing earned its second win of the season Sunday afternoon with Ross Chastain at Talladega Superspeedway. That is two wins in the last five NASCAR Cup Series races for the second-year team, one that is a newly expanded two-car operation.

Winning races and building a championship-contending company is team co-owner Justin Marks’s job, but he also knows the importance of keeping a healthy balance between Trackhouse enjoying its successes and without getting too far into the clouds.

“Celebrate it quick and get over it quick,” Marks says. “After we won COTA, we were doing a bunch of media in the stop (that) Tuesday afternoon – and I told Ross, ‘I’m over Texas. I’m all about Richmond right now’. Just like we’re going to be at Dover this week. We’re super, super committed to the day in and day out process. Our model of doing the work that’s proven to be successful.

“It’s a challenge. Managing success is every bit as difficult. There comes a lot of responsibility with success. That means committing fundamentally to what got you there and the process of getting there, not expecting to be the team every week. Just basically waking up, going to the shop Monday morning, knowing we could suck at Dover this weekend. Both cars could suck. The competition is out there to crush you every single week. That’s kind of how we think.”

Fortunately, Marks has a group of employees who buy into his mentality. When starting the No. 99 team for the 2021 season, Marks hired the best from around the sport. Then, with the acquisition of Chip Ganassi Racing and adding Chastain in the No. 1, he added other proven talent by keeping some of the Ganassi folks.

Marks explained that the cumulative experience of those who work for him is “hundreds” of years in the sport. On that basis, no-one is unfamiliar with winning and the agony of defeat.

“We’re all doing a good job of how we manage the highs and lows,” Marks says. “I don’t think we get that low, and we don’t get that high. (Sunday) was fun. But this week, we’ll be focused on Dover and knowing that’s an entirely different challenge again.”

There are expectations and then reality. While Marks expected his organization to be in this position, the reality is that he can admit it has happened rather quickly. Daniel Suarez put in a strong debut season for the team with four top-10 finishes and laps led. And coming into this year, Suarez and Chastain have both had speed and chances to win.

Trackhouse, according to Marks, will not be a team that is remembered as a flash in the pan for being good for such-and-such period. Challenges will come from other teams and manufacturers, and Trackhouse needs to be ready for those days and make sure they don’t fall off. Having people who believe in the company and are open-minded and are excited about the Next Gen car helps.

Chastain is one of two drivers (along with William Byron) with two wins in 10 races. That wasn’t part of what Marks expected.

“But my goals in 2022 were not in numbers of wins, points positions, one car makes the playoffs,” he says. “It was, and continues to be, making sure every week we get better and that we invest in each other and we learn this race car and we constantly improve. Those are the goals every week at Trackhouse.

“The wins are nice. The results are nice. But that’s a byproduct of the work we put in Monday through Friday. That just continues to be where we focus on our attention.”

Enjoy success quick, and move on just as quickly. 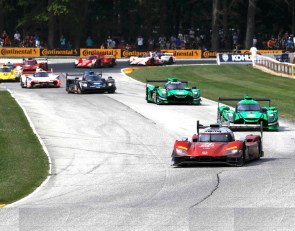