Ricardo Juncos and Brad Hollinger are willing to have their Chevy-powered NTT IndyCar Series team prepare a second car for the Indianapolis 500 and answer the question of where the 106th running of “The Greatest Spectacle in Racing” will find its 33rd entry.

The owners of the Juncos Hollinger Racing team, which runs British rookie Callum Ilott in its No. 77 Chevy, could be the leading option to run an extra car after changing their response from an unequivocal no to a possible yes. Nonetheless, JHR also hopes another team will step forward and bear the responsibility.

“It looks like we might be the only option,” Juncos told RACER. “So what I said to [IndyCar] is I need to have as much time as possible. Unfortunately, this is a last-minute deal, and honestly, like I have said every time, I don’t want to do it.

“I said to them to find someone else, and if I’m the only option and there is no other option for us to have the 33 cars, then we will make it happen. Brad and I will only do this because I always want to help IndyCar, because they have been so good to us. But we are the last option for this, not the first.”

RACER understands that Stefan Wilson and Cusick Motorsports owner Don Cusick, Sebastian Saavedra and AFS Racing owner Gary Peterson, Spencer Pigot, RC Enerson, and 2014 Indy 500 winner Ryan Hunter-Reay are among the known candidates, with some having strong budgets to offer and others in need of most or all the funding to claim the 33rd seat.

If JHR ultimately agrees to run a second car, it would debut in May; Juncos made it clear that there is not enough time to prepare a second Speedway-spec Dallara DW12 for next week’s Indy Open Test where Ilott will drive the primary No. 77 Chevy.

Two-time Indy 500 entrant Elton Julian has also emerged as an option to support an entry for the month of May. Featuring the same crew that ran Ben Hanley in the No. 81 Chevy at St. Petersburg, Long Beach and Indy in 2019 and again with the Englishman in 2020 at the 500, DragonSpeed sold its car to Meyer Shank Racing, which was used to win the 2021 Indy 500 with Helio Castroneves.

DragonSpeed has focused on sports car racing since exiting IndyCar, competing earlier this year in the Rolex 24 At Daytona with IndyCar stars Colton Herta, Pato O’Ward, and Devlin DeFrancesco in one of its LMP2 cars. With his long-held passion for IndyCar, Julian is actively seeking to return and would welcome a start by leasing a DW12 and ensuring the Indy 500 has its traditional 33 entries in position.

RACER understands JHR would be willing to lease one of its Chevy-ready Dallaras and the necessary equipment to DragonSpeed if the right terms can be negotiated. Considering the team’s reluctance to enter two cars, if JHR can help IndyCar to get to 33 without having to run the effort, a perfect solution might be on the horizon.

“My interest is genuine,” Julian told RACER. “It’s a target of mine and I see it as the single best championship we can compete in. It’s commercially viable; IndyCar is the top tier. We want to come back for 2023 and do something bigger — at least Indy again — if nothing more is possible, but this is where we want to be so we’re trying now to make things happen.”

Separate from locking in a 33rd entry, a desire to identify a 34th car and driver combination to create bumping is another known interest held by the series. An answer on which team will facilitate the 33rd car at Indy is said to be imminent. 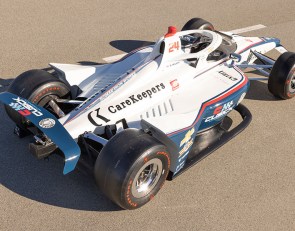