Haas to miss start of test due to freight delay

Haas to miss start of test due to freight delay

Haas will miss the start of the second pre-season test in Bahrain due to a freight delay, with Pietro Fittipaldi set to carry out the team’s first running of the week.

A technical issue with its scheduled flight prevented the Haas freight from leaving the United Kingdom on time to fly out to this week’s official test in Bahrain, forcing a re-organization of plans at the last minute. Given the paperwork required for the changes, the freight only arrived in Bahrain late on Tuesday night, meaning the garage setup and car build will not be completed in time before the start of running on Thursday morning.

“This delay will impact our program but we are targeting being out on track for the second session Thursday afternoon with Pietro Fittipaldi driving the VF-22,” a Haas spokesperson said.

Fittipaldi was always set to drive at some point this week as Haas works to finalize its driver line-up for 2022, having terminated the contracts with Nikita Mazepin and title sponsor Uralkali following Russia’s invasion of Ukraine.

Haas had hoped to announce Mazepin’s replacement earlier this week but a number of contractual issues have held up that process, with uncertainty over whether a deal can be confirmed before the test begins. The team intends to run both of its race drivers during the test as well as Fittipaldi if he doesn’t get the seat, as it wants the reserve driver to have experience of the 2022 car.

Antonio Giovinazzi, Kevin Magnussen and Nico Hulkenberg have all been linked with the vacancy as experienced options for Haas to partner Mick Schumacher. 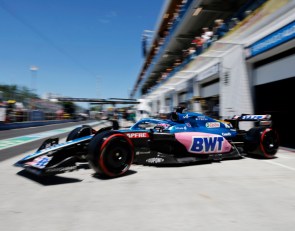