Jason Daskalos has taken the honor of receiving the first checkered flag of the 2022 SRO GT America powered by AWS season in SRO3 after a hard-fought battle with Scott Smithson and George Kurtz, who finished second and third respectively.

GT4 saw a packed field with plenty of action, with Marko Radisic claiming the top of the podium followed by Derek DeBoer and Moisey Uretsky.

At the start of the race, the field’s first dive into Turn 1 proved catastrophic with several instances of contact, and several racers being put out of contention due to damage. Between cold brakes, cold tires, and a tricky braking zone that put everyone’s ABS to the test, the green flag was quickly replaced with a lengthy full-course yellow flag.

In SRO3, Daskalos (No.27 Daskalos Motorsports Audi R8 LMS) led the entire race, though Smithson in the No.8 DXDT Racing Mercedes-AMG GT3 never left his rear-view mirror, and neither did Kurtz in the No.4 Crowdstrike Racing by Riley Motorsports Mercedes-AMG GT3. As all three drivers entered GT4 traffic during the second half, race craft was tested to its limits. Daskalos delicately weaved through traffic to avoid getting held up and in-turn lose ground to Smithson and Kurtz. Each driver kept looking for opportunities to get a run on him, but never quite found success.

“It was good!” Kurtz replied when asked how his race went. “First race of the season for SRO and we came away with third place. I think any time you get through a street course and get on the podium it’s a good day.” Kurtz will be taking home some extra hardware, as he won the Crowdstrike Fastest Lap award with his blistering 1m13.964s lap time.

The packed-and-stacked GT4 field saw some major changes in position, with Marco Radisic claiming the win in his No.22 SRQ Motorsports BMW M4. “Very excited to win a home race, especially after qualifying went unplanned with a brake issue” the Tampa area native spoke of how St. Petersburg has gone for him so far. “I wasn’t expecting to drive from eighth to first, especially in a shortened race with a full-course caution.”

Not far off of his bumper was Derek Deboer in the No.66 TRG Porsche 718 Cayman GT4 CS MR, and then Moisey Uretsky in the No.55 Accelerating Performance Toyota GR Supra GT4.

“I was so thankful to make it to that start” Deboer shared about his on-track experience after having mechanical issues earlier in the day. “There was a lot of yellow flag time, but I got a good re-start, and man that BMW was fast!” Defending 2021 GT America GT4 Champion Jason Bell (No.2 GMG Racing Aston Martin) encountered issues early on in the race, but was able to fight his way back to a fifth-place finish.

Be sure to tune in tomorrow (Saturday), for Race 2 at 11:00 a.m. Eastern. Like all SRO races, check out the free livestream on the GT World YouTube channel. 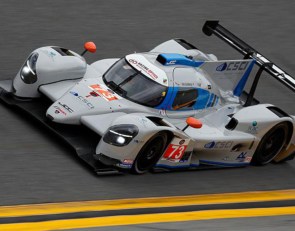