Porsche achieved a dream North American debut for the new 718 GT4 RS Clubsport with a 1-2 finish Friday in the Grand Sport (GS) class of the BMW M Endurance Challenge, the opening round of the 2022 IMSA Michelin Pilot Challenge season.

Stevan McAleer, in the No. 28 RS1 Porsche, stalked Owen Trinkler’s identical No. 64 Team TGM Porsche for several laps as the final 30 minutes of the four-hour race unfolded, finally edging past in the famous tri-oval section of Daytona International Speedway with just under 13 minutes remaining.

From there, McAleer eased the Porsche he shared with Cocoa, Florida, native Eric Filgueiras to a 4.631s margin of victory over the No. 64 car co-driven by Ted Giovanis.

“I grew up about an hour south from here, came to this race all my life, and always said I was going to be in it one day,” Filgueiras exclaimed. “This is my first IMSA race and my first IMSA win, and I’m just so glad to be here. I don’t know how to describe what this means to me.

“Stevan McAleer is an absolute hero, and that’s why we hired him,” Filgueiras added. “He took his time, he was persistent and he was patient. You could see that (executing the winning pass) took time. He kept asking how much time was left, and you could see he made a couple attempts that didn’t quite work as he tried to feel things out. This was an absolute team effort.”

McAleer said he encountered a gearbox glitch about 30 minutes into his stint that required him to recycle the Porsche’s electronics. After that, the car was flawless and fast – albeit, no longer in the lead.

“It was frustrating watching cars passing me left, right and center,” McAleer said of the moments when he slowed and had to reboot the car. “We had a little bit of work to do, but the car was utterly fantastic. It shows how good the new Cayman GT4 platform is because so many teams have moved forward with this car.”

The final restart came with McAleer running sixth, but he was confident in working his way to the front. He harbored a bit of worry about Trinkler in the leading Porsche.

“I wanted to play the game smart and certainly not take two Porsches out at the end of the race,” McAleer said. “Credit to him because we touched fenders a few times.”

Gary Ferrera and Kris Wilson, in the No. 11 Capstone Motorsports Mercedes-AMG GT3, won the Bronze Cup awarded to the top-finishing entry with an all-Bronze rated driver lineup. The No. 11 finished 11th overall.

No. 5 Alfa Romeo Wins in TCR, Wickens Shines with Podium in Debut

After a plethora of lead changes in the Touring Car (TCR) class, Tim Lewis gapped the field in the closing laps and drove on to the class victory in the No. 5 KMW Motorsports with TMR Engineering Alfa Romeo Giulietta Veloce TCR. Lewis, who shared the car with Roy Block, won by 9.524s over the reigning TCR champions, Michael Lewis and Taylor Hagler in the No. 1 Bryan Herta Autosport with Curb-Agajanian Hyundai Elantra N TCR.

Tim Lewis took the lead for good with a half-hour remaining when he passed Stephen Simpson in the No. 54 Michael Johnson Racing with Bryan Herta Autosport Elantra. It led to Block’s fourth Michelin Pilot Challenge win and the third for Lewis, who delivered Alfa Romeo a pair of breakthrough victories in 2021.

“This is my seventh year in IMSA, and for six years I’ve had my heart broken at this track, my home track, because I live in Orlando,” Block said. “What a result, what a team effort. Tim was just a Swiss army knife watch. He just kept turning out the laps. This field is good top to bottom.”

Lewis said attrition was a factor. Friday’s race is one of just two on the Michelin Pilot Challenge schedule to run four hours; the remaining eight are each two hours in length.

“Some of the cars I was running with at the beginning had mechanical issues,” Lewis said. “I was hoping we’d have a seat at the table at the end. It was a total team effort. We drove flawlessly, our pit stops were flawless, our strategy was flawless.”

Third place continued the inspirational story of the week, with Robert Wickens getting a podium finish in his series debut in the No. 33 BHA Hyundai. It was Wickens’ first race since he was paralyzed in a 2018 IndyCar crash.

He logged nearly 90 minutes in the car before handing off to co-driver and fellow Canadian Mark Wilkins.

“Physically, I’m fine,” Wickens said. “I’ve been working hard the last few months just in case I had this opportunity. I could have done another stint and another stint after that. I was just having a blast. It felt really good out there.” 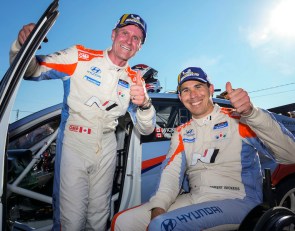