The German marque looked down and out throughout practice, but apparent problems with Red Bull Racing’s rear wing set up Max Verstappen and Sergio Perez to underperform through the crucial grid-setting hour.

Black tape appeared on the ends of the rear wing flap on Verstappen’s car in response to apparent structural problems discovered during practice. The team subsequently neglected to engineer a slipstream with Sergio Perez on the first lap, handing Mercedes an opportunity to snatch provisional pole.

Bottas stepped up to the plate, and by the end of the first runs his best time of 1m15.875s was more than a tenth quicker than Hamilton and 0.35s faster than Verstappen’s best effort.

Red Bull Racing responded by sending Sergio Perez out to tow Verstappen through the fast first sector, and he was closer at the end of the first stint, but disaster struck at Turns 10 to 11. Perez, distracted by Yuki Tsunoda running off the road to get out of the way, overshot the turn, and Verstappen subsequently lost time as he eyed the rejoining cars.

“Unbelievable,” Verstappen radioed his team. “What a dumb idiot.”

His lap was ruined, leaving pole to Bottas ahead of Hamilton for Mercedes’s first front row lockout of the year.

“It was an awesome lap, especially my lap in the first run in Q3,” he said. “I think honestly that first run in Q3 was one of my best laps, and it’s a good feeling.”

Hamilton starts alongside him on the front row, from where he will need to defend Mercedes’s one-two position on the long run down to the first corner.

“I’m just as shocked as everyone, but we’ll still take it,” he said of the unexpectedly strong result. “We didn’t think we had the pace this weekend, so to lock out the front row is so special.”

Verstappen was frustrated to let a pole chance go begging through a car imbalance, but the Dutchman was optimistic starting third directly behind Bottas could benefit him at the race start.

“It seemed like through qualifying the balance went away a little bit,” he said. “Third is not amazing, but I think it’s still better than starting second.”

Sergio Perez, who topped Saturday practice, qualified fourth and a tenth behind his teammate.

A tough break for Checo in qualifying 😖

But he'll be fired up for the race 💪#MexicoGP 🇲🇽 #F1 pic.twitter.com/mnOONyUUdr

Pierre Gasly was a strong fifth for AlphaTauri, just 0.581s off the benchmark and comfortably ahead of Ferrari’s Carlos Sainz.

Sainz and Daniel Ricciardo were the leaders in the battle between Ferrari and McLaren, the Spaniard pipping Ricciardo by just 0.002s despite the Australian benefitting from Norris’s slipstream, which the team had practiced during the morning. Charles Leclerc followed in eighth.

Yuki Tsunoda beat Lando Norris in ninth and 10th, but both will be sent to the back of the grid with engine penalties to start 17th and 18th.

Sebastian Vettel was knocked out 11th ahead of Kimi Raikkonen and George Russell. Russell, however, will serve a five-place penalty for a gearbox change, though he will drop to only 15th after others ahead of him are sent to the back of the grid with more substantial penalties.

Antonio Giovinazzi was eliminated 14th after a spin entering the stadium section on his final lap, the Italian lucky to escape without damage despite contact with the barrier.

Esteban Ocon qualified 15th, but an engine change to his Alpine will send him to 19th on the grid. That will promote teammate Fernando Alonso, who was knocked out in Q1 in 16th — indeed the Spaniard will start 12th after other penalties are applied.

Nicholas Latifi was 17th fastest, a tenth ahead of Haas teammates Mick Schumacher and Nikita Mazepin. Latifi will be called to the stewards after the session along with teammate Russell for

Lance Stroll qualified last after a smash exiting the final corner. The Canadian carried too much speed through the bend and struggled to hold it, the car eventually escaping his control and smacking sideways into the wall.

Stroll was already carrying a back-of-grid penalty for a power unit change; any damage to the chassis necessitating a change will force him to start from pit lane. 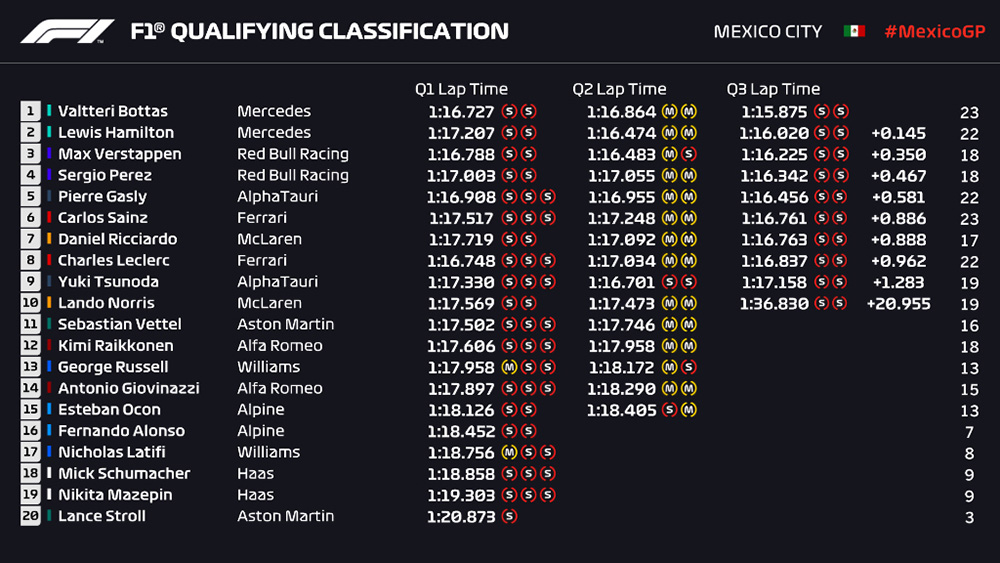