Max Verstappen will start alongside Lewis Hamilton on the front row of the grid after beating the Briton to pole in thrilling conclusion to qualifying at the United States Grand Prix.

Red Bull Racing overcame a substantial deficit on Friday to dominate the qualifying hour, but it was Sergio Perez who led the way in the pole shootout, stealing a 0.019s advantage from his teammate after the first laps.

Mercedes looked down and out, and Hamilton’s first lap looked visibly disjointed compared to the hooked-up Bulls, leaving him 0.384s adrift.

But the Briton, first of the three on track for the final runs, set the fastest time of the afternoon in the fast middle sector to shave almost half a second from his time and take provisional pole.

Verstappen and Perez were next on the road, but they were racing not only the Mercedes but the sudden appearance of showers at the end of the track poised to deprive them of grip. But the Dutchman was undeterred, and with the help of a purple first sector, he found almost 0.3s to take top spot.

It was just in time — Perez, just behind him on the road, ran out of grip as the rain arrived and could barely improve. Pole belonged to championship leader Verstappen.

“It was quite exciting out there,” he said. “In Q3 my first lap wasn’t amazing, and then in the final lap it started spitting, a bit of drizzle, in the last sector especially.

“I wasn’t sure if I could hold onto my lap time, but it came together. To be P1 and P3 as a team is a strong performance.”

Hamilton said there was no more pace to squeeze from his Mercedes and that his focus was now on beating Verstappen to the checkered flag.

“I gave it everything today,” he said. “It was a bit of a struggle through qualifying. [Red Bull Racing] were incredible quick.

“I was happy with my last lap … but I think that was pretty much everything we had.”

Perez put on a brave face after losing what would have been his first F1 pole, pointing to the rain as a culprit for his fractional improvement with his final lap.

“We were really close,” he said. “Unfortunately my final lap wasn’t as good throughout the lap. I think the rain hit me a bit too hard in the final sector — there were sports of rain and I lost a bit of grip in two corners.”

Valtteri Bottas qualified fourth and more than half a second off the pace, but the Finn will start ninth with a five-place penalty for taking a new internal combustion engine, limiting his strategic usefulness to Hamilton in what is likely to be a two-stop grand prix.

Ferrari teammates Charles Leclerc and Carlos Sainz will be promoted to fourth and fifth, Sainz one of just two drivers in the top 10 to start on softs, with Daniel Ricciardo and Lando Norris moving up to sixth and seventh for McLaren.

AlphaTauri was off the pace of the top four teams, but Pierre Gasly will start eighth ahead of Bottas, with Yuki Tsunoda 10th as the only other driver set to start the race on the soft tire.

Esteban Ocon qualified 11th thanks to the provision of a perfectly timed slipstream from teammate Fernando Alonso down the back straight on this final lap.

Joining him on the sixth row of the grid will be Antonio Giovinazzi, who was 13th fastest in Q2 but gains a place from Sebastian Vettel, who will be sent from 12th to 18th with a penalty for installing a new power unit beyond his allocation this weekend.

The same is true for Fernando Alonso and George Russell, who were 14th and 15th for the session, Russell without a time to his name after exceeding track limits. Both are carrying power unit penalties that will have them start the race 19th and 20th respectively.

Lance Stroll was knocked out 16th ahead of Nicholas Latifi, Kimi Raikkonen and Haas teammates Mick Schumacher and Nikita Mazepin, but all five will be bumped up three places on the grid ahead of the penalized Vettel, Russell and Alonso. 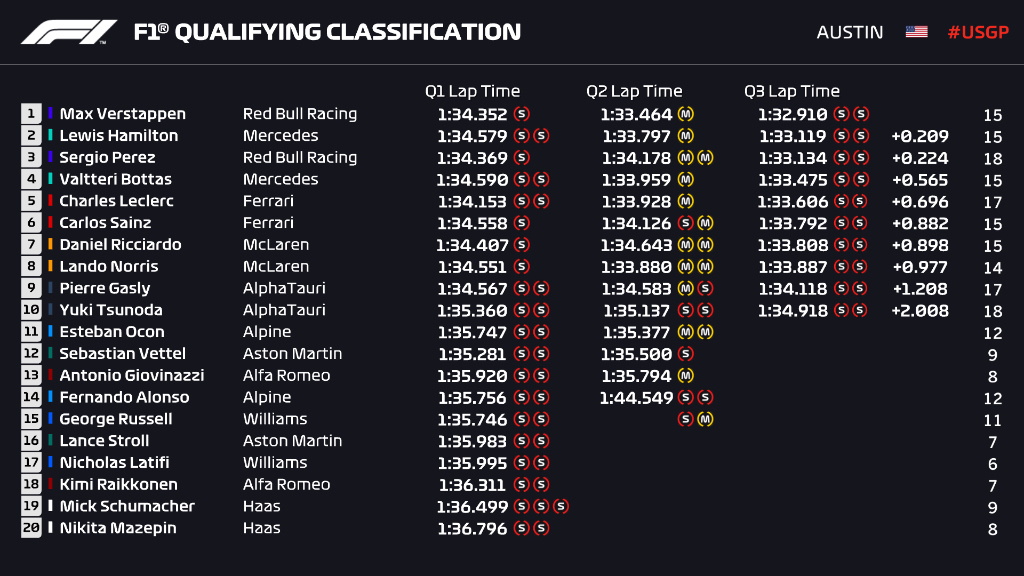