Sergio Perez laid down a final marker ahead of qualifying to lead Carlos Sainz in third practice at the United States Grand Prix.

In a session that featured almost exclusively hot laps on the soft tire, Perez lowered Friday’s benchmark to 1m 34.701s to beat the Ferrari driver by 0.104s. But the Mexican’s way was gilded by Max Verstappen and Lewis Hamilton having late laps deleted for running off the track, the former at Turn 19 and the latter at Turn 9.

Verstappen’s best effort would have been 0.318s quicker than his teammate’s leading time, while Hamilton would have been 0.243s ahead. Instead they ended their sessions third and sixth, 0.211s and 0.518s adrift respectively, setting up an intriguing picture for qualifying later today.

Lando Norris slotted into fourth among the front-runners for McLaren, while Valtteri Bottas survived spinning through the esses and flat-spotting a set of soft tires to finish fifth.

Lap times tumbles throughout the session owing to teams prioritizing the soft tire to save their sets of mediums for the race, which most think is likely to require two stops owing to the abrasiveness of the track. The medium tire is also likely to feature in Q2, so that those who qualify in the top 10 can set it as their starting compound, with the soft too delicate to use for a meaningful race stint.

Daniel Ricciardo was 0.6s off the pace to end the session seventh, with Pierre Gasly — one of only two drivers to use the medium tire so far today — was eighth.

Charles Leclerc was ninth and almost a second off the pace, though a faster lap by the Ferrari driver would have gained him an extra 0.3s and put him seventh had he not run wide at Turn 19.

Esteban Ocon completed the top 10 for Alpine ahead of Sebastian Vettel, the only other driver to use a set of medium tires this session.

Williams teammates George Russell and Nicholas Latifi were 12th and 14th, mixing in with Alfa Romeo pair Kimi Raikkonen and Antonio Giovinazzi in 13th and 15th.

Lance Stroll was 16th ahead of Fernando Alonso, who was running a brand-new power unit that will see him join Vettel and Russell at the back of the grid on Sunday.

Yuki Tsunoda was 18th ahead of Haas duo Mick Schumacher and Nikita Mazepin. 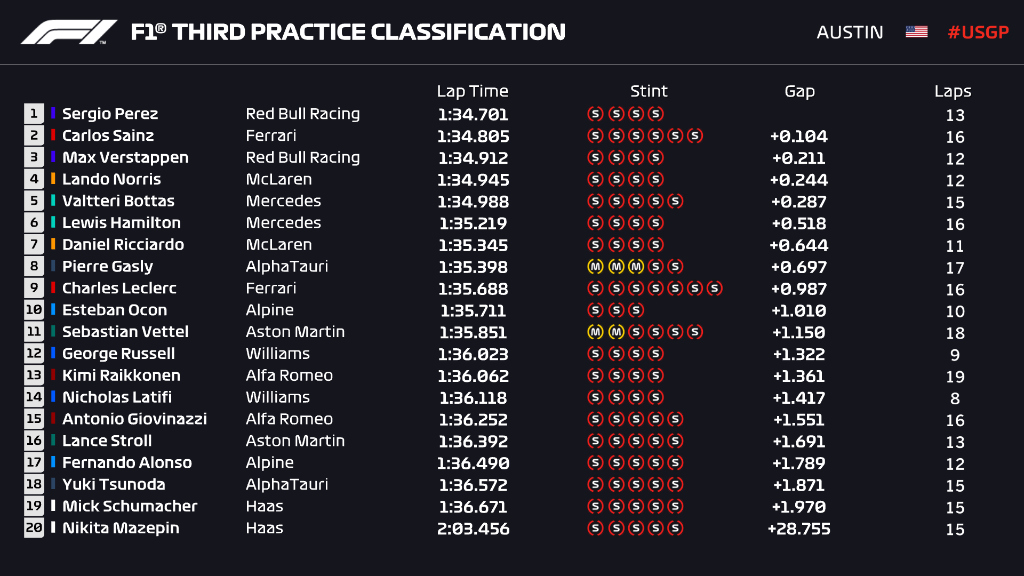