The Red Bull Racing driver’s fastest lap was 1m34.946s on the soft tire, but earlier in the session Hamilton had set a time 0.104s quicker, only to have it erased for driving off the track at Turn 19.

A second lap by the Briton brought him up to third, 0.364s off the pace and a tenth behind Lando Norris, who slotted into a strong second for McLaren.

Valtteri Bottas was half a tenth behind his teammate to finish fourth, with Daniel Ricciardo completing the top five in the second McLaren, 0.5s off the pace.

Max Verstappen didn’t feature at the top of the time sheet after abandoning his soft-shod lap in traffic. The Dutchman expressed his frustration over team radio to be released for his hot lap among a gaggle of cars, and he chose to pit and prepare for his long-run simulation rather than wait and go again, leaving him eighth in the classification.

It was the second time his running had been thwarted this afternoon, having earlier been jumped in a queue of slow cars in the final sector by Hamilton. The two then raced side by side from the last corner through to Turn 2, where traffic forced Verstappen to concede to the Mercedes. “Stupid idiot,” he radioed back to his pit wall.

Just Lewis and Max wheel to wheel on a Friday…

Lance Stroll was sixth for Aston Martin ahead of Charles Leclerc, who lost some time in the pits to complaints there were objects rolling around in the cockpit around his feet early in the session. Verstappen followed ahead of Carlos Sainz in the second Ferrari and Antonio Giovinazzi for Alfa Romeo.

Esteban Ocon was 11th ahead of AlphaTauri’s Pierre Gasly. Fernando Alonso had another difficult session for Alpine, spinning backwards into the barrier at Turn 19 late in the hour. The Spaniard managed to keep the engine running and was able to return to his garage for repairs, btu he again completed the fewest laps of the session, with just 18 to his name.

Kimi Raikkonen ended the afternoon 14th ahead of Sebastian Vettel and Yuki Tsunoda. Mick Schumacher led the battle at the back for Haas, with Williams teammates Nicholas Latifi and George Russell 0.3s and 0.5s shy of the German respectively and Nikita Mazepin completing the order as the only driver more than 3s off the pace. 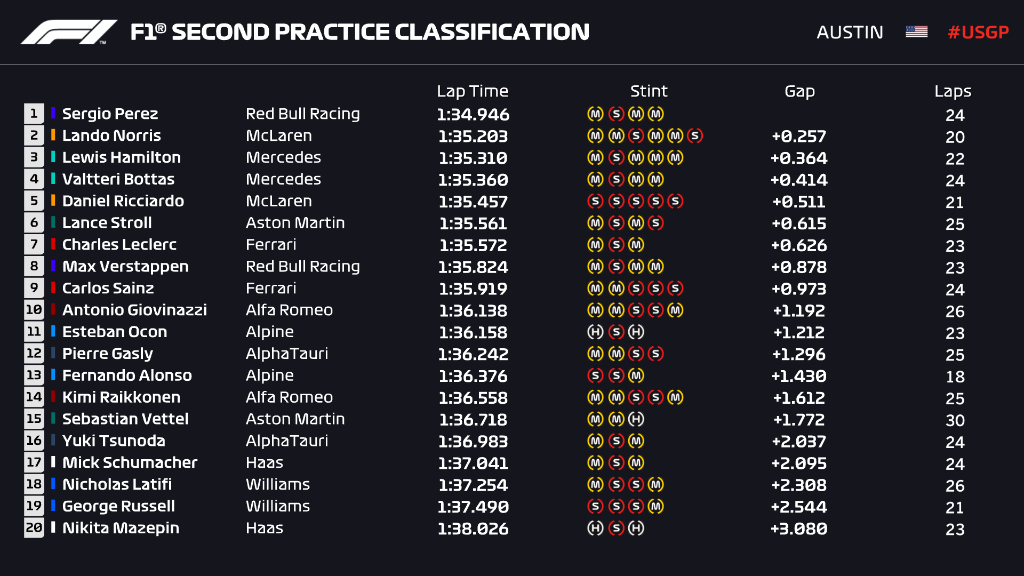