Devlin DeFrancesco loved everything about his first day driving the No. 29 Andretti Autosport NTT IndyCar Series entry. The Canadian shared the track with Kyle Kirkwood, his Andretti Indy Lights teammate, and with the two spending the day at Sebring’s short course, DeFrancesco got to grips with new Firestone tires, lots of new Honda horsepower, and left the circuit feeling grateful for all he learned on the Road to Indy training ladder.

“It was a super nice car to drive — crazy on the brakes with the carbon brakes; you can really attack the braking quite aggressively, and the car just does everything so well,” he told RACER. “The HPD guys do a really nice job; very linear power. Just a super sophisticated car in every way compared to anything I’ve ever driven before.

“The tire, I have to say, is mega as well. The tire comes in very fast. There is a drop-off compared to the Cooper, but it is it is a very nice tire to drive. I think Indy Lights is a good training ground for it because in some respects, I’d say the Lights car is harder to drive than the Indy car.”

DeFrancesco had Ryan Hunter-Reay’s former race engineer Ray Gosselin overseeing the test in the No. 29 Honda. Having a championship- and Indy 500-winning engineer to open his account in an Indy car was among the highlights of the day.

“His method of working through things is unbelievable,” he said. “Very calm, cool, collected kind of guy and works through all the programs methodically. Joe D’Agostino was working with him as well and he’s a very switched-on kind of guy; there’s some mutual guys that we know in Europe together so I have to say I really love the team the guys around me today. And Josh Freund, the team manager; nothing but great people. I have to say thanks for the opportunity.”

DeFrancesco, despite being unconfirmed by the team, is expected to remain in the No. 29 entry going forward. As far as how Day 1 went, he’s ready to keep building in a process designed to create a bright future in the big series.

“Honestly, the vibe post-test is nothing but being really, really happy,” he said. “Everything definitely lived up to my expectations. The car is just the biggest leap of anything I’ve ever driven before and there’s so much to learn and so much to take in. I’m filled with nothing but motivation to just keep moving forward and keep improving there. There are things that went really well, and things that we need to work on. So, just super happy with how the day went and how the day ended.” 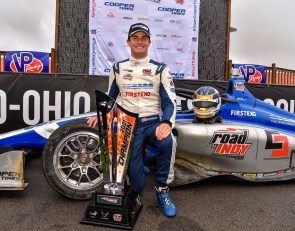