The No. 79 WeatherTech Racing Porsche 911 RSR scored their second win of the season in a race that Matt Campbell described as smooth, but certainly not easy. It was a big win for the team perform they head off to the 24 Hours of Le Mans and it came at the home track for Cooper MacNeil and WeatherTech with over 300 employees of the IMSA-title sponsor in attendance.

“It definitely wasn’t easy at times,” Campbell said. “The team was always updating me and giving me the information I needed to be able to do what I had to do with getting the fuel mileage we needed to to be able to make it to the end of the race and we did the job we needed to it.”

The Porsche factory driver completed a final stint that eclipsed the one-hour mark, a remarkable feat considering how much time drivers spend at full-throttle at Road America.

“It definitely wasn’t easy, but it’s obviously a fantastic result for WeatherTech being a home race and for us as well. We haven’t had the best of runs since Sebring and now to get our second win, it’s a fantastic result and especially the way we did it.

“There was only one moment where I went off in the carousel trying to pass a car, but other than that everything ran very smoothly – no issues,” Campbell said. “It was just the team updating me, informing me, of what I needed to do to make it to the end and obviously updating me on what the Corvettes were doing.”

The WeatherTech Porsche has needed to find alternate ways of competing with Corvette this year. Without an all-pro driver lineup and the experience of the Corvette operation, they tend to enter each race weekend at a disadvantage. In this race, the No. 79 Porsche opted for a two-stop strategy, while both of the Corvette C8.Rs went for a three-stop strategy.

“My stint was pretty cut and dry just as it is normally in these races,” MacNeil explained. “Just got to keep the car on the track and clean and in a competitive position for Matt to go out there and do what he does best so that’s what we did.”

“I had a good opportunity with the yellow to come in and do the driver change,” MacNeil said. “Then, it was up to [Campbell] from there on out to manage the tires and fuel and then go get us a win.” 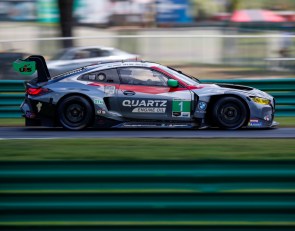