Lewis Hamilton took victory in the British Grand Prix in a thrilling late dash after crashing into title leader Max Verstappen in a huge first-lap crash at Silverstone.

The two championship contenders touched as they went side by side into Copse, but the Dutchman came off worst, sent spearing over the gravel and into the barriers in a 51G smash. He emerged seemingly unhurt from the crash, but Red Bull Racing confirmed during the race that he has been taken to a nearby hospital for precautionary checks.

The crash was the culmination of a half-lap of intense battling between pole-getter Verstappen and Hamilton, who started alongside him on the front row.

Hamilton had foreshadowed his race hinged on seizing the lead on the first lap, and after yielding the first corner he harried the back of Verstappen all through the first sector. He pulled ahead on the run down to Brooklands, but on the outside line he couldn’t keep position, slotting back behind the Dutchman through Luffield.

But his wider line enabled him a better exit through Woodcote and down the old pit straight until the two were almost side by side again into Copse, Hamilton this time with the inside line.

They swept right together and touched, Verstappen’s rear right on Hamilton’s front left. The title leader was out of the race, the crash was severe enough to warrant a red flag, allowing Hamilton to limp back to the pits with a cracked rim for repairs.

The title rivals come together at Copse, pitching Verstappen into a high-speed crash.

The Dutchman was able to walk away but he has been taken to hospital for precautionary checks#BritishGP 🇬🇧 #F1 pic.twitter.com/ol1s9dRJoa

“Every driver who has driven at this circuit knows that you do not stick a wheel up the inside of Copse,” he said. “That’s an enormous accident, and it was 100 per cent Max’s corner.

“As far as I’m concerned, full blame is on Hamilton.”

The stewards agreed. Despite protests from Hamilton over team radio and an email from Toto Wolff, the Briton was slapped with a 10-second penalty for causing the crash.

“I always try to be eased in how I approach, particularly in battling with Max,” Hamilton said post-race. “He’s very aggressive. Today I was fully alongside him and he didn’t leave me any space.”

It took 40 minutes for Verstappen’s car to be recovered and the barriers to be repaired, after which Charles Leclerc, having jumped from fourth to the lead on the first lap, lined up on pole ahead of Hamilton for a standing restart.

The Ferrari driver got away cleanly to lead the opening stint, the Briton unable to follow closely enough to make a pass and the race lulling into a phase of tire management until the first pit stop window opened for the leading two on lap 27.

Hamilton was first in, reporting his front tires were “dead” and his 10s penalty served before his rubber could be swapped meant he dropped to fifth behind Lando Norris. 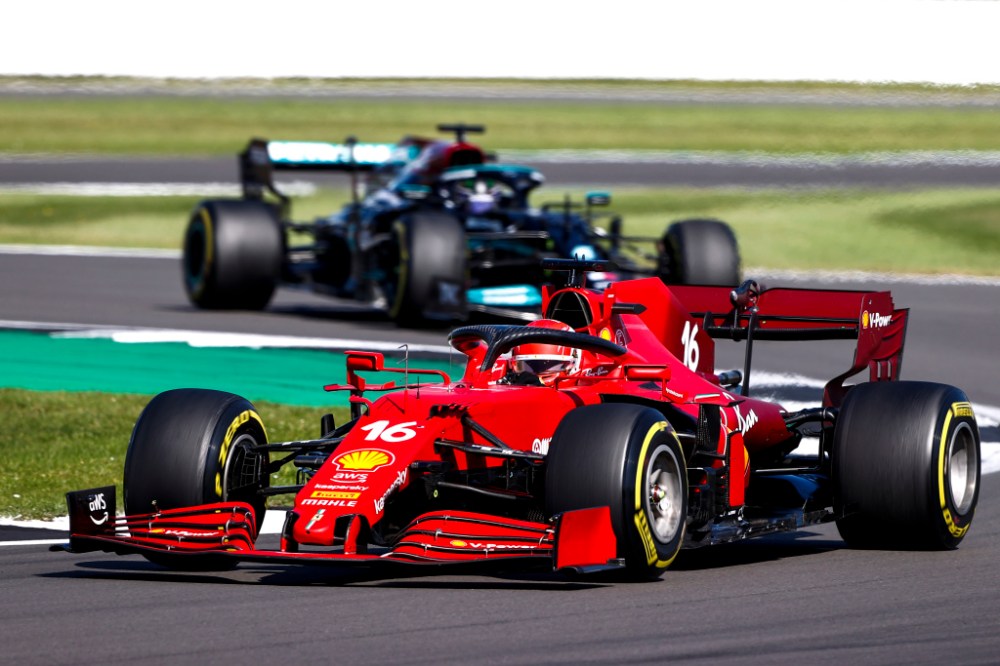 Charles Leclerc managed his race perfectly but didn’t have quite enough to hold off Hamilton at the end. Andy Hone/Motorsport Images

Leclerc didn’t need to respond. Not only did Hamilton’s penalty make the undercut impossible, but the Monegasque was getting faster and faster on the medium tire, even accounting for an intermittent engine mapping problem that would occasionally deprive him of power.

Ferrari eventually brought him in on lap 29, by which time he was so far ahead he could stop without losing the lead. But his pace was less impressive on the hard compound, whereas Hamilton was building momentum from his 13s deficit.

The Briton sliced past Lando Norris for third with 21 laps remaining and was ordered past teammate Bottas, on tires five laps older, with 12 laps to go.

The gap shrunk to a second with three laps to go, and Hamilton made his move at Copse, where he had been adjudged to cause his first-lap crash, on lap 50 of 52.

Leclerc held the outside line but ran wide, and Hamilton shot into the lead on his inside to take the checkered flag, slashing his lead from 33 points to eight.

“It’s overwhelming,” Hamilton said. “It was such a physically demanding race. I’ve been giving my all this past week back at the factory trying to recover performance for this car.

“This is a dream for me to do this today in front of [the fans].”

Leclerc had unexpectedly led every lap of the race before being mugged by Hamilton, but it was another strong result for the recovering Ferrari.

“We expected after qualifying to be quite competitive, but not as competitive as now. Overall it’s much stronger than what we are used it.”

Bottas could do little more than finish third. He’d been sucked into stopping earlier than intended when Norris behind had a slow stop, gifting him an undercut into third, but it left him unable to move any further forward late in the race.

“At least we got Lando and Lewis got the win,” he said.

Norris finished a comfortable fourth despite the slow stop, triggered by a stuck right-rear wheel. McLaren teammate Daniel Ricciardo finished fifth but was easily accounted for by 14 seconds.

Carlos Sainz was running behind leading teammate Leclerc in the first stint but was undone by a slow stop on lap 28. The Spaniard was stationary for an unrecoverable 12.3s, dropping him to sixth and out of contention.

Yuki Tsunoda scored the final point for 10th after Sergio Perez made a late tactical stop for soft tires to beat Hamilton to fastest lap of the race — he didn’t score a point for it, having dropped to 16th, but it crucially deprived the Briton of the additional score. 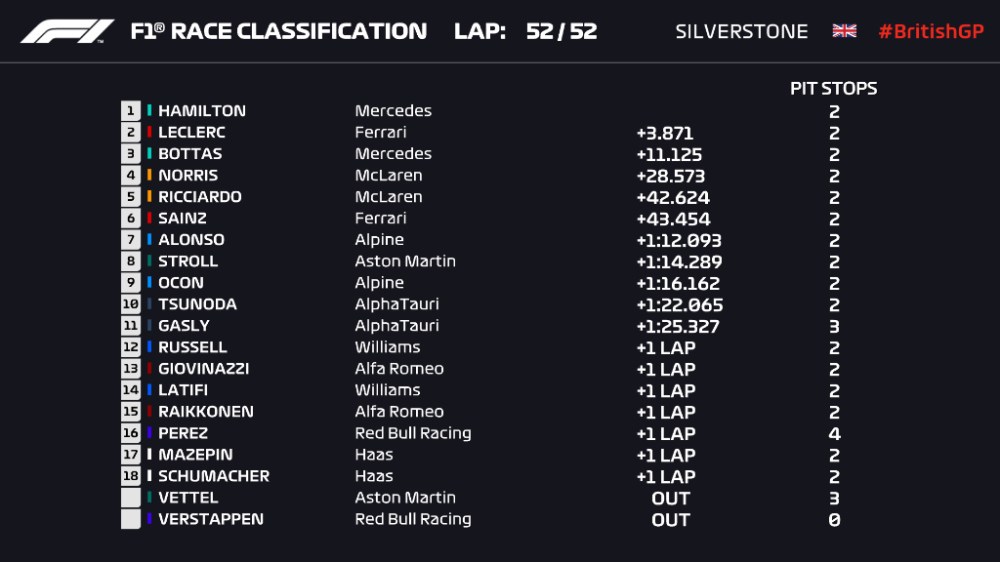