After years of trying, defending world champ Matt Hagan finally picked up his first career victory at Bandimere Speedway, powering to the Funny Car win on Sunday at the Dodge//SRT Mile-High NHRA Nationals presented by Pennzoil.

Winning in the challenging mile-high conditions at Bandimere Speedway is something that has always eluded Hagan, but the standout came through on Sunday, going 4.105-seconds at 305.70 mph in his Dodge Charger SRT Hellcat Redeye to beat Alexis DeJoria in the final round. It capped off an incredibly fulfilling weekend for Hagan at his sponsor’s race, as he won for the first time in 2021 and 37th in his career. After qualifying No. 1, Hagan beat Chris King and Don Schumacher Racing teammate Ron Capps to reach the final round. He never trailed against DeJoria, also giving DSR its first Funny win of 2021 after the team won every race a year ago.

“This mountain has chewed me up and spit me out several years in a row. I’m just so glad to pull this win out,” said Hagan, who jumped to third in points. “I’ve been trying to get this trophy for so long. It’s an important race and it’s one of those things where we finally got it done. I just cannot say enough about my team. I’m so proud of each one of them and those guys love doing what they do. My heart was beating out of my chest there in the finals.

“It felt like I was running for a championship. When you see all these fans in the stands, it gives me chill bumps. We love Denver and we love the fans that are here. I’m glad we got it done in front of them. Every win that you can get, you’re grateful for and I’m just blessed here today.”

DeJoria advanced to her second final round this season after picking up round wins against Jack Wyatt, points leader Bob Tasca III and Tim Wilkerson.

There was no stopping Top Fuel’s Torrence in Denver, as the three-time defending champ ended Joey Haas’ upset bid by going 3.860 at 320.36 in the final round in his 11,000-horsepower Capco Contractors dragster. Haas made his first career finals appearance, but Torrence’s consistency ruled the day as he earned his fourth win in the past five races, fifth this season, and 45th in his career.

Torrence, who had round wins against Rob Passey and Mike Salinas, extended his massive points lead on the strength of four runs in the mid-3.80s on Sunday, no easy feat in the rigorous conditions on Thunder Mountain.

“This is one of the most difficult places to race because everything is so much different than everywhere else we go,” Torrence said. “To have the consistency, that’s just a testament to the experience and the way (crew chiefs) Richard Hogan and Bobby Lagana race. They race really smart. Hats off to Joey Haas and that team, they did an unbelievable job today. To have the success we’ve had, it’s just a blessing. This car goes A to B, and it gives you call the confidence in the world, and it goes back to all the work these guys put in at the shop.”

.@SteveTorrence and the CAPCO boys get win No. 5 on the season! @Dodge//SRT #MileHighNats presented by @Pennzoil pic.twitter.com/Yb9TvXRkdT

Haas reached the finals for the first time thanks to victories against Alex Laughlin, who was making his Top Fuel debut, Leah Pruett, and Clay Millican.

In Pro Stock Motorcycle, Smith capped off a completely dominant weekend on Thunder Mountain by going 7.118 at 189.04 on his Denso Auto Parts/Stockseth/Matt Smith Racing EBR to beat Eddie Krawiec in the final round. Smith qualified No. 1 and made one stellar run after another, rolling to his second straight win, third in 2021, and 29th in his career. The defending world champ knocked off Cory Reed and Andrew Hines en route to the final round and rode past Krawiec in the finals to strengthen his points lead.

“This place is hard to run at, but I love this racetrack and I was successful here in the early part of my career,” said Smith, who made the quickest run in all three qualifying sessions and three of the four rounds of eliminations this weekend. “What an awesome facility and I’m so glad to get to come out here. My bike was fast all weekend and it was just super impressive. We’ve got a tough field, so it’s always going to be tough, but this bike is on kill right now.”

To reach his first final round of the year and the 86th in his career, Krawiec knocked off Jerry Savoie, Steve Johnson, and Angie Smith.

The NHRA Camping World Drag Racing Series returns to action next weekend with the NHRA Sonoma Nationals at Sonoma Raceway. 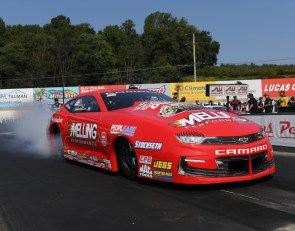 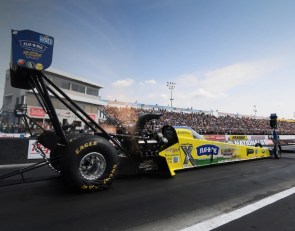 B. Force, Hight, Butner and M. Smith lead into eliminations at Maple Grove