Max Verstappen will start the British Grand Prix from pole after beating Lewis Hamilton in the first Formula 1 Sprint qualifying session at Silverstone.

Hamilton was quickest in Friday qualifying to lead Verstappen off the front row, but the Dutchman’s start was sizzling — literally in the case of his brakes, which erupted in flames as he sat on the grid waiting for the lights to go out — to take the lead into the first turn from the tardy Briton.

Bottas even tried to pull alongside Hamilton, so slow was his getaway, but the Finn wasn’t far enough ahead to hold the line into Abbey and had to fall into line for third.

Hamilton tried to resume first place immediately with forays around the outside of Brooklands and Copse, but to no avail. Though the Mercedes was quickest in a straight line, the Red Bull Racing car was loaded with downforce to rebuild the gap through the high-speed corners, effectively neutralizing the battle.

“I’m giving it everything. Can you give me more power?” Hamilton asked, but even if it were possible, the Briton’s efforts were hampered by blistering on his right-front tire from around lap 10 — surprising on what was expected to be a durable medium tire.

Verstappen too was soon struggling with blistering, but with Hamilton slowed the Dutchman was able to maintain a buffer of around two seconds for the duration of the sprint to claim three points for victory and put himself on pole for Sunday.

“Around here it’s difficult to pass, but we had a good start and a good fight with Lewis on the first lap, then we tried to do our own pace,” he said. “It sounds a bit funny to then hear you scored pole position, but anyway, we’ll take it.”

Hamilton was disappointed not to take pole and was downbeat at having lacked the outright pace advantage to retake the lead.

“I gave it everything today,” he said. “I’m sorry [to the fans] I wasn’t able to get the win in Sprint one, but tomorrow we fight again.

“It’s not good when you lose from P1, but we’ll try to turn a negative into a positive.”

Bottas was one of four drivers to gamble on a soft-tire start, but it delivered him little off the line and nothing in the race, and the Finn had little choice but to manage the rubber in the final laps of the sprint just to make it to the flag ahead of the pursuing Charles Leclerc.

The Monegasque driver was an excellent fourth, banishing memories of extreme Ferrari tire wear to keep up with Bottas for the full distance of the sprint. McLaren followed, with Lando Norris leading Daniel Ricciardo the flag in fifth and sixth after working their way past a rapid-starting Fernando Alonso.

Alonso gained a phenomenal six places on the first lap to run in fourth, but his Alpine wasn’t quick enough for such a lofty station, and the wily Spaniard resorted to extreme weaving down the straight to try to prevent the faster McLaren cars from slipstreaming past him, albeit in vain. He finished seventh, holding off Aston Martin’s Sebastian Vettel in the final laps to hold the German in eighth.

George Russell took his first top-10 finish as a Williams driver — admittedly not in a grand prix and therefore without scoring points — but the Briton is under threat of a stewards investigation for tangling with Ferrari’s Carlos Sainz. The Spaniard dropped to 18th as a result of the first-lap skirmish, though he managed to recover to 11th by the flag, falling just 0.4s shy of Esteban Ocon in 10th.

A big spin from Sergio Perez – no real damage done apart from dropping him down to P18 👀#BritishGP 🇬🇧 #F1Sprint pic.twitter.com/oEqmYDBgX7

Pierre Gasly held 12th through the sprint ahead of Kimi Raikkonen and Lance Stroll. Antonio Giovinazzi beat Yuki Tsunoda to 15th by just 0.3s, with Nicholas Latifi in 18th. Haas teammates Mick Schumacher and Nikita Mazepin completed the classification, the Russian after a first-lap spin.

Sergio Perez was the sprint’s only non-finisher, spinning off the track at Chapel on lap five and dropping down the order before being recalled to his garage to retire on the penultimate lap. 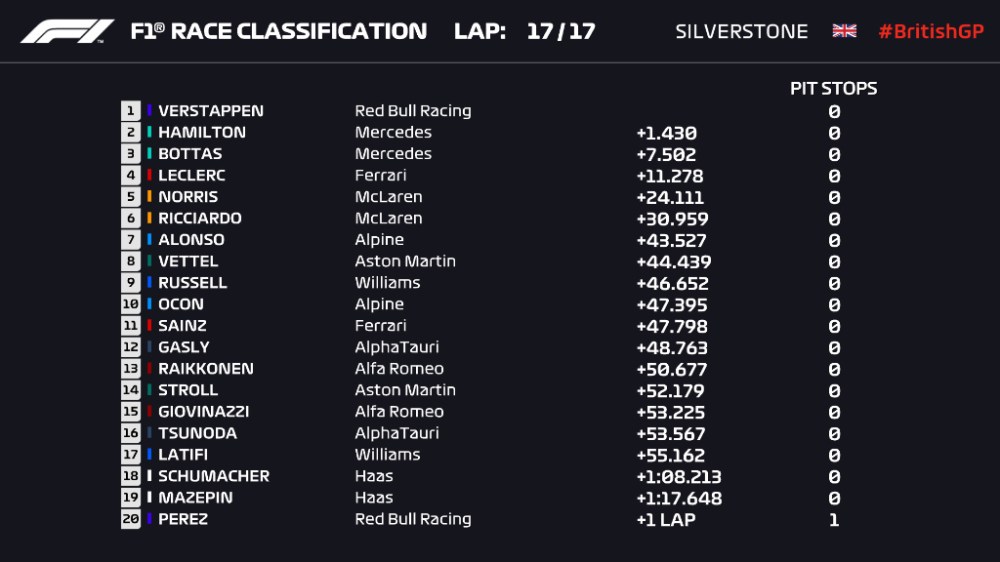