Verstappen back on top in pre-Sprint practice

Verstappen back on top in pre-Sprint practice

Verstappen’s best time, a 1m29.902s, was 0.375 quicker than Ferrari’s Charles Leclerc, though the Monegasque used the soft compound to rise to second place. His teammate, Carlos Sainz, followed in third a further 0.13s behind.

Mercedes ended the session in eighth and ninth, with Lewis Hamilton and Valtteri Bottas closely matched and 1.2s off the pace.

Both drivers focused on long-run pace, with Hamilton starting on hards and switching to softs and Bottas doing the opposite, though his opening stint on the soft compound was curtailed by an early return to pit lane for his team to fish out one of his visor tear-offs from his left-rear brake. The Finn also suffered an unusual spin through Village after time had expired for the session, badly flat-spotting the tires he was running at the time, though sustaining no car damage.

Only five drivers opted against sampling the soft tire in the final session, including Verstappen, in a possible precursor of its use during sprint qualifying later today. Pre-weekend expectations were that the medium would be the favored tire for the half-hour race, but a lack of degradation on Friday and that the same compound ran 20-plus lap competitively last year have swayed teams into investigated the C5’s viability.

Esteban Ocon was fourth in the order for Alpine, 0.8s off Verstappen’s pace but around a tenth ahead of Sergio Perez in the second Red Bull Racing car.

The Mercedes drivers followed ahead of AlphaTauri’s Pierre Gasly and George Russell, who suggested yesterday his Williams car was better balanced and more competitive in the cooler conditions of late afternoon, offering it as an explanation for his eighth-place qualification.

Nikita Mazepin got a jump on Haas teammate Mick Schumacher for 19th and 20th. 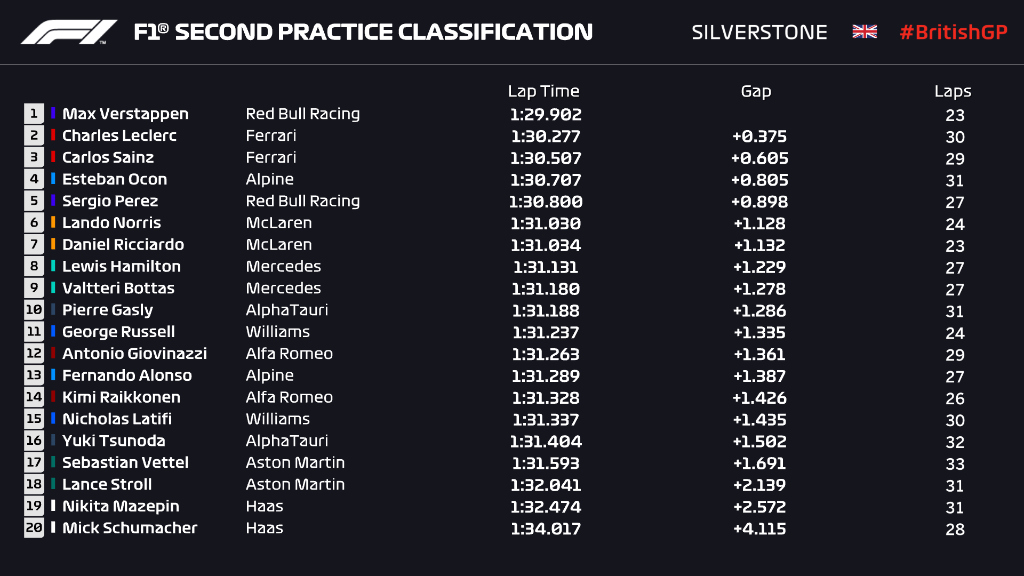