Lewis Hamilton will start F1’s first-ever sprint race from the front of the grid after edging title leader Max Verstappen in a tense qualifying session at the British Grand Prix.

Hamilton was unfancied to top the session after Mercedes showed poorly in opening practice, but the Briton built his way into the session until his first lap in Q3 put him convincingly in provisional P1 by more than 0.15s ahead of Verstappen.

And there was more to come from the reigning world champion, although his afternoon almost came undone through the final turns. Spurred by his boisterous home fans, he set two more purple sectors on his final flying lap but lost the rear of the car in Vale, losing all the time he’d gained.

The door was opened to his Dutch rival, who was also improving, but the Red Bull RB16B had been struggling with understeer all afternoon, particularly in the final sector.

Verstappen closed the gap, but not by enough, falling 0.075s short and guaranteeing Hamilton’s place at the head of the grid for sprint qualifying on Saturday afternoon.

“I was hopeful that with the great work that we’ve done as a team and the energy of the fans would get us there, so this is down to the fans I think,” a jubilant Hamilton said. “That first lap was great. The second one was looking even better, but I just lost that back end in the last corner, so my heart was in my mouth as I crossed the line.

“I don’t know what [Red Bull Racing] were doing in there. They were very quick in that practice session. But we were just focusing on our job.”

Verstappen was mystified by the emergence of car problems after his imposing first practice result, though he tempered his disappointment with the fact pole position will be awarded to the winner of tomorrow’s sprint race.

“We just need to look at ourselves, because I think the car itself was actually handling quite well,” he said. “Just a lot of understeer, so I couldn’t actually attack any of the corners. But we were still quite close. It’s all right.”

Valtteri Bottas was a close third, just 0.194s behind his teammate, despite never looking likely for P1. The Finn confirmed afterwards that it had been his turn to leave pit lane first, gifting Hamilton a potentially decisive slipstream for his first and ultimately best lap.

“It was a good qualifying,” he said. “We managed to get on pole as a team.

“I’m look forward to Saturday. There’s all to play for. We are there, and we are there to fight.”

Charles Leclerc will start the 30-minute race alongside Bottas in fourth. He was 0.694s slower than Hamilton but still pipped Sergio Perez in the second Red Bull Racing machine by 0.016s, the Mexican bumped down to fifth.

McLaren teammates Lando Norris and Daniel Ricciardo were closely matched for sixth and seventh, the Briton leading the Australian by just 0.002s.

George Russell was sensational to make the top-10 shootout for the second weekend in a row in his Williams. The Briton had only one set of tires left for Q3 but was inch-perfect with his single lap to get within 0.837s of the leader.

Carlos Sainz will start sprint qualifying ninth for Ferrari after an unconvincing first lap left him on the back foot for his second attempt, and Sebastian Vettel completed the top 10 for Aston Martin after having his first time deleted for exceeding track limits at Stowe.

Fernando Alonso missed out on the top-10 shootout by just 0.025s to start on the sixth row alongside Pierre Gasly, who was 0.028s slower than the Spaniard.

Esteban Ocon, his confidence renewed with a chassis change, was less than a tenth of a second behind teammate Alonso to qualify 13th ahead of Alfa Romeo’s Antonio Giovinazzi and a low-on-confidence Lance Stroll in 15th.

Yuki Tsunoda will start 16th after a scruffy last lap in Q1 that left him 0.4s slower than teammate Gasly.

Kimi Raikkonen will start 17th alongside Nicholas Latifi in the second Williams, while Mick Schumacher will lead Nikita Mazepin on the all-Haas back row of the grid. 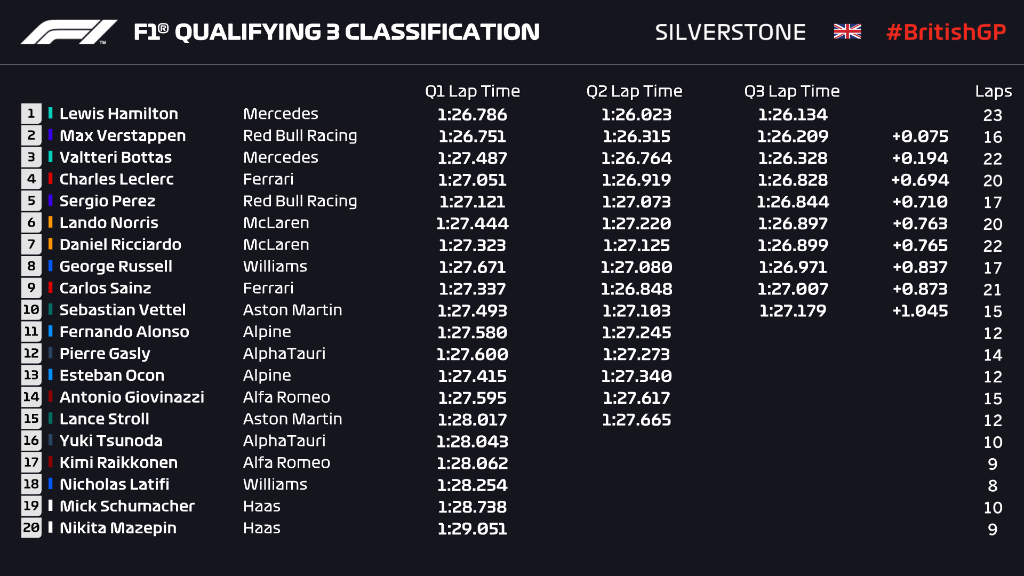