Top Gun Racing has made its on-track debut at World Wide Technologies Raceway while shaking down the No. 75 Chevy with driver RC Enerson.

The 24-year-old Floridian with four NTT IndyCar Series starts spread across 2016-2019 turned the car’s first laps at speed late Monday morning ahead of an anticipated attempt to qualify for the Indy 500.

Dressed in a ‘Johnny Lightning’ livery borrowed from the 1970 Indianapolis 500-winning Vel’s Parnelli Racing entry piloted by Al Unser, the TGR car was not carrying sponsor logos during the outing.

RACER confirmed Chevy has completed its assignment of Indy-only engine leases, and with TGR’s inclusion, the number is at 18. Honda Performance Development has also confirmed its allotment of 18 for the May 30 race as being complete, which would suggest 36 cars will vie to fill the 11 rows of three. 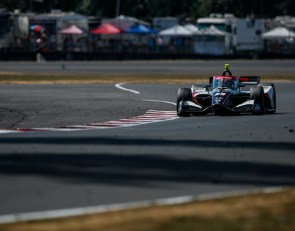