Ferrari Challenge Trofeo Pirelli continued its 2021 season with the first races its weekend at Sonoma Raceway in the heart of California’s wine country.  With gusting winds from the nearby San Francisco Bay, but otherwise perfect blue-bird skies and perfect temperatures greeted the 40+ drivers of the Ferrari Challenge series.

Trofeo Pirelli. Cooper MacNeil (Ferrari of Westlake) took his spot at the top of the podium in the Trofeo Pirelli class after starting on the overall pole for the Trofeo Pirelli race.  After easing away from Jason McCarthy (Wide World Ferrari), tire preservation became the key factor determining pace, and MacNeil’s tires degraded faster than McCarthy’s, leading to a dramatic closing lap as the Trofeo Pirelli AM2 driver closed within four tenths of MacNeil at the checkered flag.

Trofeo Pirelli AM1. Enzo Potolicchio (Ferrari of Central Florida) took the win in the AM1 category, scything past Martin Burrowes (Ferrari of Ft. Lauderdale) as Martin’s enthusiastic driving style did not serve him well on the low-grip surface at Sonoma Raceway and he went on to finish second.  Third place was claimed by Neil Gehani (Continental Autosports) who had his own battle with Brent Holden (Ferrari of Newport Beach) with the two drivers finishing less than a second apart after 30-minutes of racing.

Trofeo Pirelli AM2. Jason McCarthy (Wide World Ferrari) had a stand-out race, taking the win in class and second overall.  Starting from the outside pole position, he quickly lost out to MacNeil at the start, but drove a consistent and controlled race to maximize the performance of his Pirelli tires, winning his class by over 20 seconds.  Brian Davis (Ferrari of Palm Beach) took second, besting third place finisher Justin Wetherill (Ferrari of Central Florida) by a further 20 seconds at the checkered flag.

Coppa Shell.  Michael Watt (Ferrari of Atlanta) took his first win of the 2021 season at Sonoma Raceway after an excellent battle with the pole-sitter Chris Aitken (Ferrari of Houston) that resolved itself mid-way through the 30-minute contest.  From there significant tire degradation affected Chris’ race but he was able to fend off a train of challengers, led first and foremost by Todd Coleman (Ferrari of Denver), who had to settle for third, just four tenths of a second behind.

Coppa Shell AM. Benoit Bergeron (Ferrari of Quebec) took the win in his first race of the 2021 season, besting Franck Ruimy (Ferrari of Beverly Hills) and Lance Cawley (Ferrari of Atlanta) who finished second and third respectively.  Finishing as they qualified, the trio drifted apart as the race progressed as the aged surface of the Sonoma circuit caused significant tire degradation of the Pirelli rubber and some drivers were either better able to manage their driving to reduce the wear, or they were more comfortable pushing on less grip. At the end of their thirty minutes of racing, the trio was separated by just about 30 seconds. 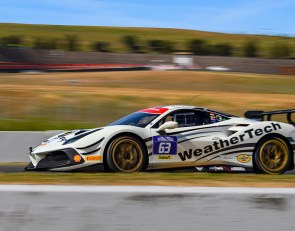 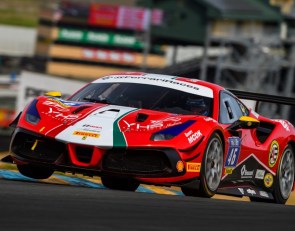 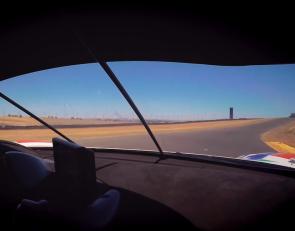 Video: A lap of Sonoma onboard a Ferrari 488 Challenge Evo