After an hour-long rain delay postponed the start of the race, it was TC-classed machinery that was able to take advantage of the wet track and claim the overall victory with the No. 78 Genracer Hyundai Veloster N of Jeff Ricca, his first win of the season. “The track is actually pretty grippy when it’s wet, so we had a great setup and it really paid off,” said Ricca, “I was able to pass where I didn’t think I could, but it worked out and I’m very excited to grab the class and overall win!” Ricca also set the fastest lap and will start Sunday’s race from pole.

The abbreviated 35-minute race saw TCX points leader Jacob Ruud and the No. 81 Classic BMW lead the field the green flag with Steve Streimer’s No. 30 Hard Motorsport BMW second. Josef Federl would run in front of the TC field in the No. 23 TechSport Nissan with Caleb Bacon leading TCA in the No. 18 Forbush Hyundai.

On the second green flag lap Eric Powell, who started third in the TC class, got the No. 92 Skip Barber Racing Schools Honda around Mike LaMarra’s No. 37 LA Honda World Honda Civic Type-R and the No. 23 to grab the class lead and move up to third overall.

At the 24-minute mark the second-placed car of Streimer spun at the esses, giving Powell second-place overall as the other rear-wheel TCX cars would struggle in the wet. Ricca, who started 15th overall, and the No. 78 Genracer Hyundai Veloster slotted into third overall, second in TC, just ahead of the pole-sitting Federl.

With 21 minutes remaining, Powell slipped past Ruud at Turn 5 and claimed the overall and TC-class lead. Ricca would pounce on Ruud half a lap later and grab second overall and in class. Behind the top two in TC, Toby Grahovec and the No. 26 Classic BMW got past Federl for fourth overall, third in TC and start to close on Ruud for third overall.

At the 17-minute mark Ricca passed Powell for the lead by sneaking on the inside of the Honda at Turn 1. Four minutes later a safety car was called for Mark Pombo’s stranded No. 60 Mini Cooper GP3. The race would get back to green with just under 6 minutes to go with Jeff Ricca leading overall and in TC, Jacob Ruud leading TCX sitting third overall, and Caleb Bacon in TCA, 11th overall.

At the four-minute mark Mike LaMarra’s No. 37 Honda slid past Federl’s Nissan for fifth in the TC class with Kevin Boehm’s No. 9 DXDT Honda following LaMarr through for sixth in class. Toby Grahovec, sitting third in TC, then got past the No. 81 of Ruud’s TCX machine to claim third overall.

The TCA field saw Jose Blanco and the No. 99 VGMC Honda Civic Si get past the No. 61 Mini of Derek Jones for second in class with only 2 minutes to go, with the Mini driver fighting back on the final lap.

Jacob Ruud continued his winning ways in TCX, finishing fifth overall with Samantha Tan and the No. 438 ST Racing BMW coming home second in class. The No. 50 Classic BMW of John Hennessey came home in the final podium spot.

“Driving in the rain is such a unique experience, especially in a rear-wheel drive car, I’ll at least know what to expect for tomorrow!” said Ruud.

“This is huge,” said Bacon, “We knew coming into the weekend the car was good in the rain, so we started out front today and brought it home!”

TC America presented by Skip Barber Racing Schools Round 4 will go green on Sunday, May 2nd at 9:00am CT streaming live at the GT World Youtube channel. Follow the TC America social media channels for even more in-depth coverage. 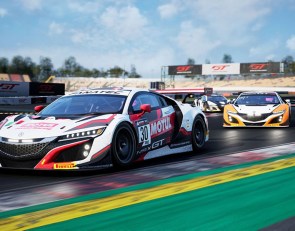 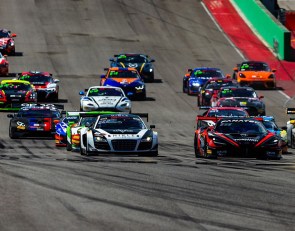 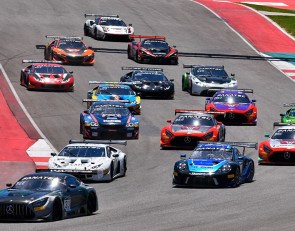