ECSTAR Suzuki’s Sean Dylan Kelly drew first blood in the 2021 MotoAmerica Supersport Championship with his victory over rival Richie Escalante in the season-opener at Michelin Raceway Road Atlanta, but in the other support classes it was mostly new blood taking advantage of the class champions exiting stage left.

The tight battles at the front of the Supersport field that were an every-race occurrence last year between 2021 Champion Escalante and title runner-up Kelly picked up right where they left off in Supersport race one at Michelin Raceway Road Atlanta.

Kelly, who started from the pole aboard his M4 ECSTAR Suzuki, got the holeshot twice in the red-flagged race and held off all but one of Escalante’s attempts to take the lead. The HONOS Kawasaki rider, who ended up having to race his 2020 HONOS Kawasaki after crashing his 2021 green machine in final qualifying, couldn’t match Kelly’s pace. Kelly showed that 2021 may flip the script as his margin over Escalante at the checkers was more than 2.6 seconds. Cycle Gear Racing Yamaha’s Nolan Lamkin survived the attrition that led to the red flag and successfully reached the podium for his best-ever result in Supersport competition.

“I’m really happy with how this weekend is going so far,” Kelly said. “This is exactly what I came for. I prepared a lot this off-season – not only me, but also my team. We worked really hard together after a tough 2020 season. I learned a lot last year. I knew this year what I was coming into and I came prepared. I’m really happy with this. We’ve been working really hard since yesterday. We got the pole this morning. I really do think this race was if not the best, one of the best of my career just because of the pace I had. I’m sometimes not known for being able to go by myself and making fast laps with a really good pace like Richie. That was his strongest point last year. That’s exactly what I worked for this off-season. This is what we worked for all weekend, just to be able to pull really, really fast, consistent laps all week through the whole race, and that’s exactly what I did. I think three laps to go I set one of my fastest ever laps at this racetrack. Really proud of the work from my team. Really proud of believing in me and trying to make steps forward. It wasn’t only me; it was the package. I feel like the package we have this year is definitely better, and that’s the most important part. It’s a team effort at the end of the day. Really happy with the race. Definitely a hard battle at the beginning. I think we still have some work to do for tomorrow, some things that I saw compared to Richie (Escalante) and some things that I just felt throughout the race. Really happy with the feeling, happy with the start. This is only the start of the year, so looking forward to continuing and doing a good job.”

In Saturday’s Stock 1000 race, long-time literbike road racer Michael Gilbert got the victory aboard his brand-new Kawasaki ZX-10R, and he prevailed over hard-charging Jones Honda rider Ashton Yates, who was also aboard a brand-new bike – the Honda CBR1000RR-R Fireblade SP. Both riders battled hard in the 13-lap event, as did third-place finisher Travis Wyman, who raced his trusty BMW S 1000 RR to a coveted spot on the podium.

“It has been a long time since we got a win and honestly, there was a point in December or January where we weren’t really sure we were going to be racing,” Gilbert said. “We got a few really key sponsors – Chuckwalla Valley Raceway back in Southern California being one of them, giving us an amazing place to train during the winter with JP43 Training. All the work that we do through the winter and then Octane Lenny came on board right at the last minute and really kind of sealed the deal to put us back in the MotoAmerica paddock and give us a strong package to work with. I’ve got to give it up to my guys, including Jason Aguilar. It’s a bummer to see him not on a Superbike. I know he was trying to put a program together, but I’m so, so happy that I snagged him to work for me this weekend. It’s been really fun just to have a good friend in the pits and someone who is really, really smart. Josh Merrill, as well. My dad back home, Graves Motorsports. Everyone that has just put an amazing motorcycle under me. To get back to it, it has been a long time. I could get used to this. I like hearing you say my name. So, we’re going to keep working hard and try and do it again tomorrow.”

Coming into the Twins Cup season, the big question was, how would the brand-new Aprilia RS 660 fare in MotoAmerica’s rough-and-tumble “tuner class.” Very well, thank you very much. In Twins Cup race one, the new, twin-cylinder middleweight sportbike swept the podium with Robem Engineering’s Kaleb De Keyrel taking the victory over Righteous Racing’s Jody Barry – who has returned to the MotoAmerica Series after a few years away – and Hayden Schultz, who is one of De Keyrel’s teammates.

“It was super fun,” De Keyrel said about the race. “Really good battle for quite a ways through. Overall, I can’t complain. Showing up here never riding the bike before and being right on pace pretty much right off the bat just really proved to myself that I did my homework in the off-season. I did a ton of training at the go-kart track and been riding motocross a ton, making sure that I’m physically fit and ready. I knew we were going to kind of be a little bit under-prepared as far as getting testing in on the bike because we didn’t have enough time. The Aprilia came out so late in the year that we didn’t have a whole lot of time. Really, we’re just lucky to be here. I wouldn’t be here without Matt (Spicer) and Gene (Burcham) and all of (Robem Engineering) putting in so many hours on the bike and working through everything, turning it into a race bike. Just to even be here was a huge feat in itself. I just wanted to leave here with solid points. Obviously, I was involved in the championship hunt last year and I ended up losing, so I’m hungry to prove that I can be a frontrunner and win races. That’s what we did today. Just did the best we could, like we always do. It was a lot of fun.”

The final race of the day on Saturday at Michelin Raceway Road Atlanta was in SportbikeTrackGear.com Junior Cup, and a brand-new rider in MotoAmerica emerged with the victory in the red-flagged-and-restarted event. Tyler Scott raced his KTM to the win by just .271 of a second over Landers Racing Kawasaki’s Ben Gloddy. Veloce Racing Kawasaki’s David Kohlstaedt finished third, which was the first MotoAmerica podium of his career.

“I got the start both times and I passed (polesitter) Gus (Rodio) on the first lap,” Scott said. “From there on I’m like, ‘I’m going to try to pull away.’ Every few laps coming out of turn seven, I would look back and there was always someone there. So, I knew I had to keep pushing and keep being consistent, otherwise they were going to overtake me. In the end, the last lap was a little stressful because I knew if Ben passed me anywhere past the halfway point in the lap, I was probably going to end up second. But I kept pushing and I got the win.” 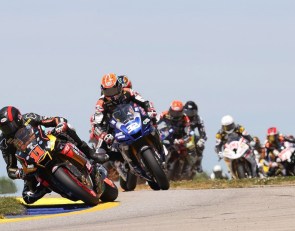