Two guests on The Racing Writer’s Podcast this week: Tad Geschickter, one of the co-owners of JTG Daugherty Racing, and Grant Dexter, the CEO of Fanaply. Geschickter (pictured above with wife Jodi) talks about the business of owning a race team and engaging fans and sponsors during a pandemic while Dexter explains digital collectibles and working with a NASCAR team. 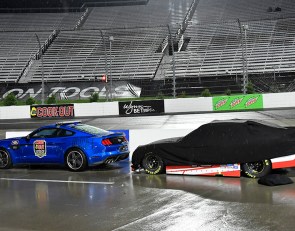