It’s two Roar Before the 24 test sessions down, and two top performances from the Action Express Racing Cadillac DPi team. The only difference from the first outing is which AXR entry led the field, with Mike Conway delivering a lap of 1m36.225s in the No. 31 Cadillac DPi-V.R.

Meyer Shank Racing jumped up to second overall with the No. 60 Acura ARX-05 with a nearly identical lap produced by Juan Pablo Montoya (+0.006s), and Cadillac Chip Ganassi Racing’s Scott Dixon claimed third in the No. 01 DPi-V.R (+0.277s). 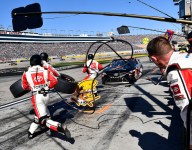 ABOVE: NASCAR ventures out of Florida for the first time this year, heading west to Las Vegas. A variety of motor racing is available (…)