Marks promises “a disruptive and courageous vision” for the team’s direction during its first season of Cup Series competition with Daniel Suarez (pictured above, with Marks) as the driver of Trackhouse Racing’s No. 99 Chevrolet.

Welcome to the House, @pitbull. pic.twitter.com/SR9WhzYsut

“From day one of creating Trackhouse Racing, I wanted our team to be a platform for purpose, to transcend the sport and positively impact all races on and off the track,” said Marks. “I am proud that in just a few months we are here announcing a partnership with one of the most influential and recognized artists in the world. Within the first 10 minutes of our first meeting, it was clear Armando and I share a vision and passion for impacting the lives of the underrepresented. We are creating and compelling a movement of positivity and possibility, using the platform and excitement of sports and music. Through NASCAR and our partnership with Pitbull, we are going to have the attention of a global demographic that is ready to be inspired into action for themselves, their families and their future.”

Pitbull, also known as “Mr. Worldwide” has sold albums by the millions and has built an audience as a brand-building endorser and an activist for social and charitable causes.

In addition to being an active partner on the Trackhouse executive team, Perez will serve as a brand and philanthropic ambassador. Together, Marks and Perez will foster the launch of a racing-themed STEM curriculum within the SLAM! (Sports Leadership Arts and Management) inner-city charter schools, which Pitbull helped establish seven years ago.

“I’ve been a fan of the NASCAR story since the movie ‘Days of Thunder,’” said Perez (Pitbull). “As soon as I met Justin, Ty Norris (team president) and Daniel, we were on the same page. They welcomed me aboard, and now we’re going to show the world NASCAR is not only a sport but it’s a culture.”

In addition to his role with Trackhouse, Pitbull will be attending the Daytona 500 on Feb. 14. 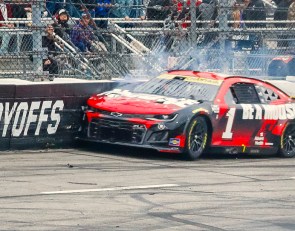 Trackhouse rides wave from Chastain’s ‘Shot Heard ’Round the World’