“Lucas Oil has made the decision to discontinue owning and operating both the Lucas Oil Off Road Racing Series and the Lucas Oil Regional Off Road Series,” said director of race operations, Ritchie Lewis. “This year, Lucas Oil made an incredible financial effort to keep our off road commitments to our employees, promoters, racers and sponsors, during arguably one of the roughest periods of time for our country. As we look ahead, there are too many variables that could impact the financial commitment and overall health of the series going forward, which necessitated this difficult course of action.”

For the past 12 seasons, the Lucas Oil Off Road Racing Series has hosted a who’s who of off-road racing’s most recognizable names, including Rob MacCachren, Kyle LeDuc, and Carl Renezeder, along with crossover stars like Brian Deegan, Jeremy McGrath, Carey Hart, and Jeff Ward. Perhaps even more significant is the series’ development of dynamic young driving talents who are poised to achieve success, no matter what they are driving. This includes budding NASCAR stars like Hailie Deegan and Sheldon Creed, along with short course off-road’s ascending talents like RJ Anderson, Jerett Brooks, Brock Heger, Ryan Beat, and more.

“The Lucas Oil Off Road Racing Series could never have achieved the levels of success it did without the individuals who made it all happen — out on the racetrack. The unwavering commitment from our drivers over the years has allowed Lucas Oil to invest in their talent, and we couldn’t be prouder to see all the success stories that have come out of this championship,” added Lewis. “Moreover, we owe tremendous gratitude to the companies that have lent their support to short course off road, as their partnerships were invaluable to our success. As we close this chapter, these individuals and our relationships are what we will remember.” 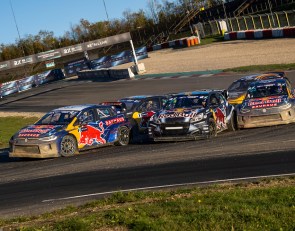