Global Mazda MX-5 Cup presented by BFGoodrich Tires championship leader Michael Carter (No. 08 Carter Racing Enterprises) grew his advantage with a dominant run to victory in the opening race of a championship doubleheader at the Grand Prix of St. Petersburg on Saturday. The final race of the 2020 Global Mazda MX-5 Cup season will be staged on Saturday afternoon, with a $200,000 support package from Mazda on the line.

It was a familiar cast of masked faces joining him on the post-race podium, as Selin Rollan brought the No. 87 Spark Performance entry home less than one second behind Carter, while Robert Noaker (No. 13 Robert Noaker Racing/Slipstream Performance) made a last lap move to secure third at the line over Robert Stout (No. 3 White Racing).

The 45-minute race opened in dramatic fashion after pole sitter Gresham Wagner suffered a mechanical issue on the formation lap, ending his race before it started as the race clock started under caution for cleanup.

The green flag flew with 30 minutes remaining on the clock, as Rollan led the pack to the flag. Carter made his move to take the lead on lap 11 and held strong as the front four dueled for position through the long green flag run to the finish.

“That was probably the hardest I’ve ever driven a race car,” said Carter. “I just can’t thank my guys enough. We weren’t really the fastest this weekend. We struggled a bit in practice and qualifying, but we made some adjustments and it all counted when it mattered most. Me and Robert Noaker got side by side, we raced clean. Robert (Stout) raced me clean. I just can’t believe it. When I got in the lead I was just like ‘go, go go!”

Having been a consistent podium finisher as well as taking a victory at the Indianapolis Motor Speedway, Rollan entered the race third in the championship and closed the gap to second place championship holder Noaker with his runner up finish. The result came despite racing with a car that had a different look than it did on Friday. After making contact with the wall in Turn Nine in qualifying on Friday, his Spark Performance team made an all-out effort to complete the repairs needed to get him back on track for the race.

“Once I saw Gresham (Wagner) have that problem I knew that I would technically have the pole and start first, so I was kind of happy about that,” said Rollan. “A big thank you to the entire Spark Performance crew because that car was totaled yesterday and my family, my friends, the whole team worked 12 hours on the car. We got back to the hotel at 4:30am – and we have a race at 8:30am! We got second, led a lot of laps and are probably on pole for the next race. It was a crazy race, you can’t really pass much. It was just an amazing feat considering where the car was yesterday.”

After young Noaker opened the year with a pair of wins, his championship charge faded through the middle section of the season as some bad racing luck handed him some setbacks. He was able to make a return to the podium with his last-lap charge to third.

“I was behind him (Robert Stout) going into the last turn and I was just trying to fill his mirrors up,” said Noaker. “We went into the corner a little hot and I just tried to get a run on him – it was a close, clean fight to the line. I think that I was faster, but this track is really difficult to pass on and you can’t get a good run off of the turns, and the straightaways aren’t really long enough to get a draft, but everyone has to race on the same track.”

Joe Atanasio (No. 43 Provision Motorsports) made a big impression in his first-ever series start as he earned the Hard Charger award with his work going from 17th on the grid to 10th at the finish.

“It is super fun out there, and I love these fast shifting transmissions,” said Atanasio. “I just kept my cool through the race, and I was able to get up there and get the Hard Charger award, I’m really happy and ready for the next race!”

Rookie of the Year leader Jared Thomas decided that discretion was the better part of valor as he took to pit lane with ten laps to go with an eye on returning to race action in the afternoon. Thomas has unofficially secured the 2020 Rookie of the Year title, which will see him net $75,000 in support from Mazda for the accomplishment.

The final race of the 2020 Global Mazda MX-5 Cup season will go green at 12:50pm ET. Live timing and video feed is available at https://www.mx-5cup.com/results/live-timing. 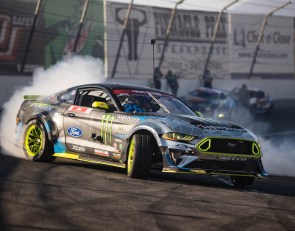 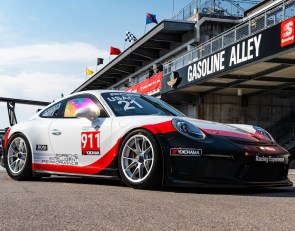 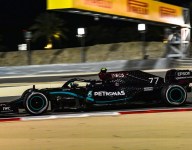