With the beating and the banging in the final 10 laps that probably had the fans at home on their feet, an emotional Chase Briscoe battled Kyle Busch to the line to capture the win in the Toyota 200 at Darlington Raceway in the NASCAR Xfinity Series’ first race back since the COVID-19 pandemic brought sports to a halt.

The win was made all the more poignant for Briscoe by the personal emotions of the week, as he and his wife, Marissa, had shared on Wednesday they had learned the day before they lost the baby they were expecting to welcome late in the year.

“This is for my wife. This has been the hardest week I’ve ever had to deal with,” Briscoe said shortly after climbing out of the car with tears running down his face. “When I took the lead, I was crying in my car. This is more than a race win. This is the biggest win of my life after the toughest day of my life. To be able to beat the best there is, is so satisfying.”

For Briscoe, it was also the second win of the season after he took the victory earlier this year at Las Vegas. He is the lone multi-race Xfinity Series winner thus far in 2020.

It was the first race for the Xfinity Series since the checkered flag flew in Phoenix, Arizona, on March 7, as the COVID-19 pandemic shut down the sporting world a few days after. And the race was further delayed by weather this week – initially the event was set for Tuesday evening but was rained out and pushed out two days, and then as continued precipitation fell it bumped a Thursday noon start by four-and-a-half hours.

Like the NASCAR Cup Series races earlier in the week, the Xfinity Series raced at Darlington without the benefit of any practice or qualifying to feel out the track. And also like the two earlier events, there were no fans in the stands and all participants followed strict social distancing protocols at the track.

Noah Gragson, who started the race on pole by virtue of points, finally led the field to green shortly after 4:30 p.m. ET and held that position through the completion of the opening stage. But during pit stops, reigning NASCAR Cup Series champion Kyle Busch took the lead and maintained it through the second stage.

But it was drama on pit road during the stops after Stage 2 that helped to set up the thrilling finish, as Busch was caught speeding on pit road and was relegated from the lead to the tail end of the field for the restart.

The threat of rain created an urgency in the field that saw three-wide racing and plenty of famous “Darlington stripes” being applied to the right side of the cars as a result.

With 20 to go, Briscoe and JR Motorsports driver Justin Allgaier were bouncing off the wall in a tussle for the lead, while at the same time Allgaier’s teammate Michael Annett made a leap from fifth to third – but the advantage was short-lived as his car spun out four laps later to bring out the final caution.

Busch had worked his way up to fifth at the time of the caution, and exited the pits in third which set up a restart with nine to go that put Briscoe and Allgaier on the front row, with Busch and Austin Cindric right behind them. Briscoe took the advantageous outside position on the restart and used that to gain a quick lead while Allgaier and Busch fought for second.

Briscoe gained a half-second lead on the all-time Xfinity Series wins leader Busch while he was working on passing Allgaier, but with three to go, Busch changed his line and dropped low to pick up ground on the leader.

With the two using all of the race track, they swapped the lead in the final lap as Briscoe bounded off the wall coming to the white flag and Busch jumped on the advantage. But Briscoe came right back, passing Busch and ultimately holding him off in a clash to the finish line.

And holding off Busch at the line meant everything to Briscoe.

“This is the number one win. Honestly, winning the Daytona 500 couldn’t even top the feeling of just, like I was saying earlier, the ups and downs. This is what my family needed and what my wife needed.”

The NASCAR Xfinity Series next races under the lights at Charlotte Motor Speedway in the Alsco 300 on Monday, May 25, at 7:30 p.m. ET on FS1, PRN and SiriusXM NASCAR Radio. 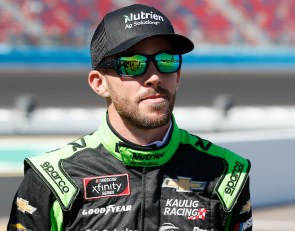