After months of wondering about his IndyCar future, it appears James Hinchcliffe finally has some good news to share.

Andretti Autosport has scheduled a press conference at the Indianapolis Motor Speedway for Wednesday morning to make a partnership announcement, and RACER.com believes it will be confirmation of Hinchcliffe driving a sixth Andretti car this May with sponsorship from Genesys.

The popular 33-year-old Canadian was dropped by Arrow McLaren SP last November despite having one year remaining on his contract, and after securing Genesys backing to run Indy, it was believed he’d likely end up with RLL or Dale Coyne Racing since there were no open seats at Andretti at the time.

Michael Andretti was planning to bring back Fernando Alonso to the Indianapolis 500 before Honda of Japan informed him last month that the two-time Formula 1 champion is still persona non grata for his comments about Honda’s F1 engine, and will not be allowed to run one of their powerplants.

So that suddenly opened the door for the Mayor of Hinchtown, who won three of his six IndyCar victories with Andretti between 2012 and 2014.

Hinchcliffe, who is a favorite of Honda and is featured in its national advertising campaign, will join Ryan Hunter-Reay, Alexander Rossi, Colton Herta, Marco Andretti and Zach Veach for his eighth attempt at winning IndyCar’s biggest prize.

Robin Miller's Mailbag: A note to our readers 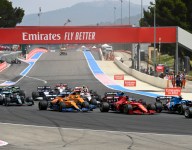 The last few weeks have seen Valtteri Bottas’ future being discussed once again, with a few rumors circulating among certain media that the (…)

Robin Miller's Mailbag: A note to our readers

Robin Miller’s Mailbag presented by Honda Racing/HPD is on hiatus this week. It will return before the next IndyCar Series round at Mid-Ohio. (…)

The product of more than 30 years of continuous development and improvement, the Trans Am Series presented by Pirelli has firmly (…)