IndyCar’s first full-field session for the 2020 season turned into a parade of woolly hats and gloves at COTA, where the morning period of the first day of the Open Test was flagged due to poor conditions.

Forecasts of rain proved accurate, but it was cold temperatures that denied the series a first chance to give the new aeroscreens a multi-car test run. A combined track and ambient temperature of 100 degrees is broadly-accepted benchmark for the lower end of the tires’ operating window, but three-quarters of an hour after the track went green, the thermometer was still showing an ambient temperature of 44, and a track temperature of 45.

Only three drivers – Josef Newgarden (photo above), Max Chilton and Sebastien Bourdais – made any attempt to complete a lap, and while Newgarden’s 2m42.6005s stood as the best, it was still almost a full minute shy of Will Power’s pole time from last year. His cockpit camera during that lap – a whirl of busy hands – told the story.

“I didn’t have any issues with the aeroscreen, it was the temperature,” Newgarden said. “It’s a little cold for us. They told me to go one time by, and I just about wrecked the car six times.”

Outside of those three, Power, Oliver Askew, Felipe Nasr and Scott McLaughlin ventured out for installation laps before deciding that there was nothing to gain from staying out.

It’s currently unclear whether conditions will improve sufficiently to allow for any running this afternoon. 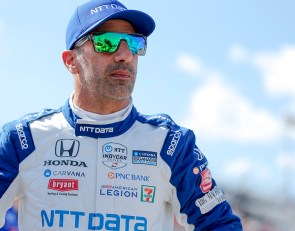