The new Heart of Racing Aston Martin IMSA GT Daytona team will reconnect the two lead drivers who represented the program in its last iteration at Alex Job Racing as Brazil’s Alex Riberas partners with England’s Ian James in the No. 23 entry.

Aston Martin to GTD with Heart of Racing

“This is a very exciting opportunity for me and the team,” James said ahead of the Friday-Sunday Roar Before The 24 test. “I have been working with Alex for years and he has proven himself to be one of the top GT drivers in the world. Roman has had an amazing season this year, and, like in 2014 with Alex, this program tries to give young talent the opportunity to shine. I’m delighted that I still get to be behind the wheel, and am grateful to Aston Martin for assigning Nicki Thiim to us, whose knowledge and experience of the car will be extremely helpful to get the team up to speed at the Roar.”

“Delighted to be back racing with this program,” Riberas added. “I have many great memories of being with this team and very much believe that we have the ability, given the car, the crew, and the driver line up, to start up where we left off – winning races and raising money for Team Seattle. The competition is fierce in the GTD class, but I’m confident in the team Ian has put together.”

“Endurance racing has always been my dream,” he said. “To be making my second start in the 24 Hours of Daytona at the age of 18, as a full-season driver in the IMSA GTD class, is something that I would never have dreamt of. In addition, to be partnered with a brand so rich in racing history like Aston Martin, is an absolute dream come true. A few weeks ago, I was in a situation not knowing what I would be doing in the 2020 racing season which is a scary thought coming off a strong year last year. I cannot thank the Aston Martin Racing/The Heart of Racing team enough for putting faith in me, to not only be back in a race car, but to be put in such a high level of competition with a prestigious brand and well-prepared team is incredible.” 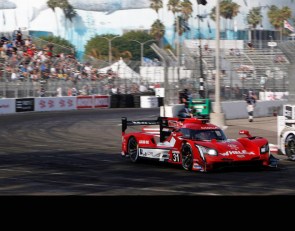