This time of year in motorsports brings about an innate sense of reflection, one balanced between what has been and what’s to come.

By almost every measure, 2019 will be remembered as a successful one in the annuals off-road racing history, with record fields and watershed events setting up a new normal in the dirt and desert.

Not everything was a highlight of course  there were some grinch-like moments this off-road racing season as well. So, in the spirit of this special season, we offer up our yearly list of candy canes and lumps of coal.

While desert-based activity is enjoying another surge of momentum right now, the short-course universe is facing challenges in rules stability, lowered truck counts and a plateau of corporate support. As if on cue, Crandon International Raceway’s massive celebration of its 50th Anniversary Polaris RZR World Championship Off-Road Races (and the Red Bull Crandon World Cup) reminded everyone of how great the sport can be when the best athletes come together and engage in on-track combat.

The 2019 crowd at Crandon. Image by Jeff Nemecek

As it has for five decades, leave it to Crandon to execute an event that went well beyond a mere off-road race, and one that all short-course weekends need to emulate for the future – at least to some level. There is still untapped potential here that needs to be exposed for the dynamic, top-flight racing and entertainment short-course competition represents when packaged in the correct way. They don’t call this the “Big House” for no reason, and let’s hope this special event acts as a springboard in 2020.

A changing catalyst in all off-road motorsports emphasizes winning big events over rather meaningless season championships. That fact is not lost on Dave Cole and the Ultra4 group that promotes the titanic King of the Hammers in California each February.

For the past few years Ultra4 has gone to Crandon for the Red Bull World Cup, and in 2019 Cole and company added unlimited Trophy-Trucks to the weekend long schedule. With Monster Energy and Toyo Tire providing financial partnerships toward a record purse that paid $100,000 to win, a select group of a world’s best desert racers and machines exposed their magic to a new and appreciative rock/4×4-oriented crowd. While the talents of young Luke McMillin took home the big prize in his first Trophy-Truck crown, in hindsight the entire sport enjoyed another cross-pollination victory.

Look for more off-road racing culture clashes like this in the future, with the Trophy-Truck (known as T-1 trucks in Ultra4 nomenclature) returning to King of the Hammers in 2020.

Even the most ardent doubters have now been silenced. In 2019 the takeover of the off-road universe by today’s side-by-side (aka UTV) phenomenon is now completely realized. It began in the mid 2000s with customized Yamaha Rhinos. Today, those pioneering machines seem primitive in comparison with modern high-performance, long travel SxS’s. New offerings from Polaris, Arctic Cat, Can-Am, Honda, Yamaha and even Robby Gordon’s upstart Speed UTV are quickly making the sport’s original portal of VW-based buggies as relevant as cable television. This OEM participation will continue as long as the sport’s rule makers can agree on that fine line that defines all production-based racing.

The reasons for today’s SxS explosion extend well beyond the fact would-be racers can finance their new rides at a local dealership. Longer and wider cars have dramatically enhanced ride quality and overall speed, while having full time four-wheel drive provides a far greater piece of mind by lowering the risk of getting stuck out in the desert. They are fun to drive, obtainable and demand far less cost and effort in terms of maintenance – a recipe for success. In fact, Red Bull just announced a new UTV-based race platform for the 2020 Dakar Rally that features young American drivers Blade Hildebrand, Mitch Guthrie Jr. and Seth Quintero. Enough said.

For years now the folks at Mad Media have carefully nurtured their rebirth of an off-road institution known as the BFGoodrich Mint 400. Under the visionary direction of company co-founders Matt and Josh Martelli, the Mint 400 has now regained its long-lost reputation as a Las Vegas lifestyle gathering that just happens to revolve around an off-road desert race. The climb back has been a testament to their expertise at crafting just the right branding narrative and the desire of off-road racers to have a world-class event here in America.

In 2019 however, the Mad Media team and off-road video production wizard Jason Markham took the concept of live streaming to generation next, with a professional group of hosts, an actual reporting set and remote feeds (including helicopters) that brought the live action of the Mint 400 right into your living room or office.

Never before has desert off-road racing felt so intimate or immediate for a live audience. Not content to reset the bar, in 2020 the group has promised an even better Mint 400 live stream with more cameras and even higher production values. Fans around the world can rejoice in the news. 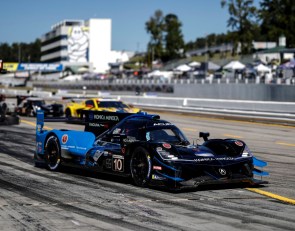