Richard Childress hadn’t yet fulfilled all his obligations, nor had the champagne dried on his clothing before he was looking toward next season.

Saturday evening, Childress celebrated his fifth Xfinity Series championship as an owner and first since 2013 with grandson Austin Dillon. Tyler Reddick, the man behind the wheel this year, also won the 85th race in the series for Childress.

Reddick joined RCR after winning last year’s title with JR Motorsports. He quickly became a favorite within the organization and was given a chance to make his Monster Energy NASCAR Cup Series debut earlier this year. Given his personality and success, it came as no surprise when Childress announced last month that Reddick was getting a full-time Cup opportunity next year.

So in the same breath where he praised Reddick’s talent and championship season, Childress brought up 2020.

“We’re so excited,” said the Hall of Fame team owner, (pictured at second from left, above). “I just felt like if we could get here (Homestead), we’d have a great shot of winning the championship, and the talent that he’s got… it’s going to raise RCR to another level.

“We’ve changed so much this year. I’m as excited about next year as I have been in a long time, having Tyler in the Cup car and the things we know he can do and what he’ll bring to RCR.”

Saturday was also not the first time Childress compared Reddick to three-time NASCAR champion Cale Yarborough. Childress is reminded of Yarborough when watching how unshakable Reddick is. Plus, Reddick drives a car sideways like Yarborough.

Austin Dillon (No. 10) and Reddick (No. 2) will be Cup teammates at RCR next year. Image by Gavin Baker/LAT

In the Cup Series, Reddick will be teammates with Austin Dillon as Childress continues to field two cars, the Nos. 3 and 8. The 24-year-old Reddick is replacing Daniel Hemric, who could win Rookie of the Year honors Sunday night after the Cup Series finale.

With Reddick’s departure, Childress still plans to have an Xfinity Series operation next year. His goal is to have one team contending for another championship and one part-time team used for development.

Childress also confirmed that not only will Reddick and crew chief Randall Burnett stay together next year, but the entire team is moving to the Cup Series together.

“It’s really special to win a championship with Tyler 50 years later,” said Childress. “It blows my mind to even think I lived to be 50, but to win a race and a championship and have a great driver like Tyler be right there with us. I am so excited about next year because he’s going to bring his whole team up.

“We’re making a lot of changes, and I think you’re going to see a different RCR next year. Tyler is going to put everybody to work over there because he’s going to bring some speed and some talent with it.” 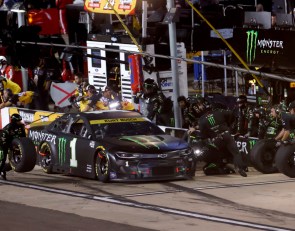