The young guns will have to wait.

Crafton claimed the title without winning a race this season, but that was all but irrelevant as Crafton moved within one championship of series leader and NASCAR Hall of Fame Ron Hornaday Jr.

“I guess I finally got out of the wheelchair and got up one the wheel and got it done,” said Crafton, who crossed the finish line 1.569s behind race winner Austin Hill, but a comfortable 9.201s ahead of Ross Chastain, who finished fourth in the race and second among the Championship 4 drivers.

“One step closer to what Hornaday’s done, and they called us the underdog.”

Crafton exhibited a mixture of elation and defiance as he celebrated in Victory Lane. Almost an afterthought among pundits entering the race, Crafton schooled his younger Championship 4 competitors with a No. 88 ThorSport Racing Ford that improved throughout the race.

That others discounted his chances clearly was a motivating factor for Crafton.

“There was nothing sweeter, to be honest,” Crafton said. “It was that little jab in the side—and I don’t know if I needed that, but it just ticked me off. And I just said, ‘I’m going to prove you really, really wrong tonight.’

“I knew I was going to do whatever I had to do for every one of these guys, for (team owners) Duke and Rhonda (Thorson) and everyone who worked hard, but I said it was that little bit extra poke.”

Though fired up by the slight, Crafton had to exercise the patience of a veteran when Hill passed him for the lead on Lap 112 of 134.

Hill passed Crafton in the late stages of the race to take the win. Image by Harrelson/LAT

“Once they told me the 24 (championship contender Brett Moffitt) was nine seconds back, and we were gapping him by three-tenths (of a second) a lap, I was like, ‘I need to look at the big picture here and not take a chance of losing this championship. Let’s just ride right here – race as hard as I could without doing anything dumb to put the thing in the fence.”

Winning the title without winning a race didn’t bother Crafton in the least.

“I’ll sleep very, very well all winter – with the trophy,” he said.

Crew chief Junior Joiner, who has been with Crafton for all three of his championships – the first two coming back-to-back in 2013 and 2014 – echoed that sentiment.

The youth movement did have its moments on Friday night. In his eighth Truck Series start of the season, 19-year-old ARCA champion Christian Eckes secured the seventh owner’s championship for Kyle Busch Motorsports with a third-place finish, a day after Eckes was announced as one of KBM’s full-time drivers for next year.

Eckes couldn’t have claimed the owner’s title, however, if it weren’t for the efforts of a veteran driver.

Crafton made his first start in the Truck Series in 2000, running only his debut race at Auto Club Speedway that year. Greg Biffle won the Truck Series title that season, and it was Biffle whom KBM team owner Kyle Busch coaxed out of retirement to run one race in the No. 51 Toyota at Texas.

Biffle won in his only start, and it was that victory that qualified the No. 51 for the owner Playoffs.

“I just thought an old retired guy might be able to get it done—and he did,” Busch said after Friday night’s race.

Coincidentally, Crafton is the first Ford driver since Biffle in 2000 to win a Truck Series championship. 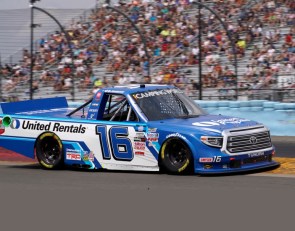