Denny Hamlin and Joey Logano still do not see eye-to-eye on what happened last weekend at Martinsville Speedway.

Contact late in the going of the First Data 500 led to a pit road altercation. Looking for an explanation, Logano confronted Hamlin and then shoved him because the answers weren’t what Logano expected to hear.

Hamlin said Friday at Texas Motor Speedway he was fine with the one-race suspension that Logano’s tire technician, Dave Nichols Jr., received. But the Joe Gibbs Racing driver continued to call out the reigning series champion and Team Penske, saying that crew chief Todd Gordon has a lack of control over the team.

“I’m not going to let him touch me,” said Hamlin. “As a man, you can’t just let that stuff happen. That’s the first thing. That doesn’t affect me, and we’re talking about it right now, but within 30 minutes when I’m going in (the garage) to work, it stops. That’s my full concentration.”

Pushed on whether Logano knows he can get to him, Hamlin responded, “No, he’s not that smart.”

Logano said time would tell if he and Hamlin are rivals or enemies. The two do have a past, including Hamlin being upset at how Logano raced while multiple laps down earlier in the playoffs at Dover. In 2013 the two had a confrontation at Bristol, and then a run-in at Fontana where Hamlin was injured.

“Here are the facts: I think Todd has great control of our race team and is a great crew chief and does a great job leading all of us,” said Logano. “I said it after the race to TV that I probably shouldn’t have gone down there looking for an apology for something he probably wasn’t going to apologize for, and I let my emotions get the best of me.

“That was a mistake on my part. I probably didn’t handle that correct. It doesn’t make what he did on the racetrack right… He can run his mouth as much as he wants. I’m going to run my race, and we’ll see who ends up ahead.”

Hamlin did admit it was his misjudgement that led to the contact. However, he also said that he takes into account who is beside him.

“I was not going to give one inch,” said Hamlin. “I misjudged. The on-track stuff was definitely my fault. There was no intention to run into him or run him into the wall or anything like that, because I put myself at a pretty big risk there of cutting tires as well. But I was just trying to use all the space that I could. Certainly, if it was like a team-mate or someone else beside me or really anyone, yeah, I probably don’t gas it up quite as soon and try to take all of that space. All that stuff plays a factor, for sure.”

Logano had heard Hamlin say he was going to use the space, but reiterated that Hamlin didn’t own up to it when they talked on pit road.

“For me, as a man, the first thing I do is own up to my mistakes,” said Logano. “I probably would have walked down to him if I did the same thing and said I was sorry and that I screwed up. That’s what sent me off the edge. I’m regretful of the way I handled it. I let someone affect my character, and that’s something I’m not proud of.

“We get stronger from these moments, and you live and you learn, and you move on. It’s part of our sport and part of the situation, part of the playoffs. You guys all have something to talk about now.”

Asked if Hamlin was perhaps trying to play mind games, Logano said, “He can try. I’m a little tougher than he thinks.” 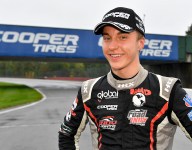