IndyCar to test aeroscreen at IMS on Wednesday

IndyCar to test aeroscreen at IMS on Wednesday

The plan for the single-day outing at Indianapolis Motor Speedway on Wednesday, Oct. 2, involves Chip Ganassi Racing’s Scott Dixon in the No. 9 Honda and Team Penske’s Will Power in the No. 12 Chevy, as both champions and Indy 500 winners will turn laps around the 2.5-mile oval with instructions provided by IndyCar’s competition department and RBAT.

Although no specific timeframe has been set for the amount of laps each driver will turn with the aeroscreen installed, Dixon and Power are expected to conduct individual runs to test visibility through the PPG-supplied material, and to provide feedback on any buffeting, chassis handling, cockpit temperatures, helmet lift, and a variety of other items on the series’ checklist.

The New Zealander and the Australian will also be asked to run together as IndyCar and RBAT gather chassis data and driver input on how lapping in turbulent air affects chassis stability, aerodynamic stability, cockpit airflow, etc.

“It’s a box-checking day, with visuals, driver cooling, tear-offs, different visors and visor tinting, and everything conceivable to test,” IndyCar president Jay Frye told RACER. “We’re going to run through the plan in the morning. Firestone has a few sets they want us to test, and there are a few aesthetic things we’ll look at too. So much of what we’re working on is about the accessories and which combinations of things work best.

“We couldn’t be more proud of how all of our partners have come together to make this happen,” Frye continued. “The 3D-printed titanium upper frame piece from Pankl itself is a work of art. Everything in this aeroscreen has been the product of an incredible team coming together to make it possible.”

The RBAT aeroscreen is comprised of multiple pieces that assemble in layers to create a rigid upper and lower frame for the screen itself. Behind the screen, a Formula 1-style halo is utilized, which mounts atop the trailing edge of the cockpit opening where the current Advanced Frontal Protection device is bolted in place. The rear connection points for the halo are found behind the driver where the main roll hoop is bolted to the chassis.

The halo piece serves as the upper mounting piece for the aeroscreen; below, a new carbon-fiber frame has been bonded to the top of the cockpit opening where the screen is bolted into position. Sandwiched to the upper and lower frames, the RBAT aeroscreen provides a significantly improved ability to absorb a blow without drastically deforming, which could not be said of the first-generation device which lacked an upper frame/halo.

Of the new features present, a central spine is shown on the leading edge of the aeroscreen. The carbon-fiber piece, which aligns with the central spine on the nose and damper cover on the Dallara DW12 chassis, assists in stability when a driver is at a high degree of yaw.

Also shown is a sponsor banner (reminiscent of those seen atop windshields in sports car and stock car racing) placed atop the aeroscreen. Unlike most series, IndyCar does not plan to mandate the placement of names or logos on the banners; teams will be free to sell the aeroscreen advertising space just as they would elsewhere on the vehicle.

The IMS test is the first of three planned outings for the RBAT aeroscreen. Provided it passes all on-track phases for visibility and other functional tests, and clears all off-track ballistic testing efforts, it would go into mass production with an anticipated delivery schedule starting in December.

A fourth test on November 5 in Sebring is also on the calendar. The primary reason for this outing is to evaluate future braking packages from vendor PFC designed to deal with the increase in horsepower due in 2022.

While there, Frye said Dale Coyne Racing’s Sebastien Bourdais, who is one of a handful of IndyCar drivers who wears glasses, will turn laps using the aeroscreen. The Frenchman is expected to report on the experience of driving while using prescription glasses, a visor, and the heavily curved aeroscreen, and offer any insights on whether the trio of items placed in front of his eyes provide any problems. 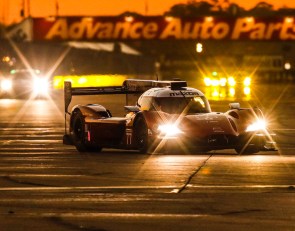