For any athlete, their rookie season can be the toughest one. And with the level of competition in the Battery Tender Global Mazda MX-5 Cup presented by BFGoodrich Tires, that can be especially true—but there is a healthy reward for success.

As the season races to the finish line this weekend at WeatherTech Raceway Laguna Seca, $75,000 in support from Mazda is on the line as Michael Carter, Gresham Wagner and Ryan Hall battle for Rookie of the Year honors.

The drivers have had to learn a new race car, new competitors, and often times new tracks as they began to understand what it takes to be a professional driver. Racing as part of the NTT IndyCar Series event weekends only adds to the experience for the young drivers as they learn to focus on performance. This season, some 16 rookies raced in the five Global Mazda MX-5 Cup event weekends so far, but only three have emerged with the best shot at the $75,000 prize from Mazda. 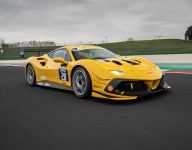 Ferrari Challenge onboard at Homestead with Marc Muzzo