Starting from seventh after a shaky qualifying session with a new engine, Ortiz had a tremendous start, rocketing his No. 4 Copeland Motorsports MX-5 to third on the first lap. Ahead of him, Sick Sideways teammates Rollan and Drake Kemper battled for the lead, which gave Ortiz the opportunity to take the point. Rollan was not to be denied, however, and retook the lead the following lap.

The trio continued to trade spots following two full-course caution periods that slowed the early stages of the 40-minute race. Rollan (No. 87 Sick Sideways Racing) began to pull away with 10 minutes remaining in the race while Kemper and Ortiz traded paint behind him.

After mechanical issues ended his Race One early, Rollan took his fifth victory of the season by 1.0416 seconds over Kemper. 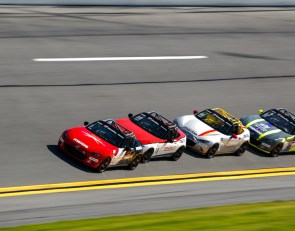 Road to Indy 55m ago