Toyota leads the way on opening day of WEC Prologue

Toyota leads the way on opening day of WEC Prologue

Toyota Gazoo Racing’s TS050 HYBRIDs led the way on the opening day of the WEC’s 2019/20 pre-season Prologue test at Barcelona.

There were two sessions of running, and by nightfall, it was Jose Maria Lopez’s 1m29.991s in the No. 7 set during the morning that proved to be the best time of the day.

Kazuki Nakajima was second-fastest with a 1m30.114s set during the afternoon session, which was interrupted by a red-flag period for a kerb issue at Turn 5 that required lengthy repair work by the marshals. There was another red flag during the day, in the morning, after David Heinemeier Hansson had an off in the No. 57 Project 1 Porsche.

The privateer LMP1s were not far off the Toyotas, the fastest of the non-hybrids being the No. 1 Rebellion Racing R-13 after a 1m31.073s by Norman Nato – a second off the best time of the day, and good enough for third overall in the second session.

As for the two Team LNT Ginettas, after a delayed start to the day caused by scrutineering difficulties, both G60s made it out for plenty of laps and were up to speed relatively quickly. The British team’s best time was a 1m31.828s by ex-Rebellion man Mathias Beche. Beche did set a quicker time, a 1m31.0s to go third-fastest overall in the afternoon (faster than both Rebellions), but it was deleted after he was found to have improved under a yellow flag.

The two Ginettas didn’t complete as many laps as the other two teams’ cars, but in total the AER-powered G60-LT-P1 managed to complete 99 laps combined, and appear to be primed for a full day of running tomorrow with the team’s smorgasbord of drivers.

LMP2 was topped by United Autosports, the now British-flagged team 0.3s clear of the field after a 1m33.110s from Paul Di Resta in the afternoon. The Scotsman, driving the team’s brand-new Michelin-shod ORECA, was 0.297s faster than newly-signed Toyota reserve driver Thomas Laurent in the Signatech Alpine by the end of the day.

There were some early bragging rights for United Autosports. Image by JEP/LAT

The quickest of the Goodyear runners was Racing Team Nederland, which sampled both the Michelin and Goodyear tires today on its new ORECA 07 Gibson. Its fastest time was a 1m34.176s in the morning, which RACER understands was set on Goodyears. The team is due to make a formal decision on its tire choice for the season ahead of the afternoon session tomorrow.

RTN is the only team testing both brands of tires in Barcelona, and should it opt to run with Goodyear for the season, the WEC’s LMP2 class looks set to be a split 50/50 between the two brands. However, RACER believes one other team may be considering a switch before Silverstone off the back of this week’s testing and RTN’s final decision.

Aston Martin’s best time of the day was a 1m45.231s set by Marco Sorensen.

The best times in GTE Am, as in Pro, were set during the interrupted afternoon session. Matteo Cairoli ran fastest in the No. 57 Project 1 Porsche, 0.0032s faster than Jorg Bergmeister in the No. 56 sister car.

Giancarlo Fisichella ended up fastest of the Ferrari drivers driving in the No. 54 AF Corse 488 GTE EVO, while Jonny Adam turned the best lap in an Aston Martin Vantage AMR (No. 90) which was a 1m46.051s, set in the morning, to go fifth in the class. 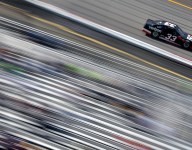