Hillin (center) with Bubby Jones and George Snider in 1977. Image by John Mahoney

Bobby Hillin always wanted to emulate Roger Penske, but truth be told, what the Texas oil man accomplished in open-wheel racing had its own place in the history books.

Hillin, who passed away over the weekend at the age of 79, went from a sprint car owner to an Indy car builder during his eight years in USAC/CART, and should be remembered as a racer who gave Jan Opperman and Bubby Jones their shot at the big-time.

A native of Midland, Texas, Hillin was a wildcatter that bought into a USAC sprint-car team in 1974, and soon started his own, Longhorn Racing, in 1975 with Bruce Walkup doing the driving and Donnie Ray Everett building the engines.

In 1976, Hillin hired Opperman and his team became an instant contender in sprints and dirt cars – on pavement and dirt. They won several races, and Hillin also bought an Eagle that Jan took to sixth at Ontario Motor Speedway.

A week later, he suffered a critical head injury at the Hoosier Hundred. Hillin kept Jan under contract, but it was obviously in the ’77 opener at Salem that he wasn’t ready to race again, so Jones got the nod to replace his good friend.

“Bobby wanted me to come to Midland to talk about driving for him,” recalled Jones, who won over 200 sprint features in 20 years. “And when I got there he said, ‘How much money do you have to have a month to drive for us?’ I didn’t know what to say, and I forget how much he paid me, but it was pretty good. I mean, how many guys got paid to drive a sprinter in 1977?”

Jones won in his debut for Longhorn at Eldora, and by May of that year, Longhorn had a Wildcat chassis for George Snider with sponsorship from Mel Simon.

“I was helping with Snider’s car, and Bobby told me that if George qualified the first weekend, then they would get the old Eagle ready for me the second weekend,” continued Jones, who wound up starting 33rd and dropping out with a blown engine in his only Indy start.

“I know he had big plans for Jan, and I’m pretty sure he helped him out after his injury. Bobby was really good to me and Jan, and gave us an opportunity when nobody else would.”

Hillin was out of sprint cars by 1978 and concentrating on Indy cars. Ground effect was coming into vogue, so he hired Williams F1 designer Patrick Head to create the Longhorn chassis and spent big bucks to get Al Unser to wheel it.

In 1980 and 1981, Unser qualified ninth at Indy but had mechanical issues. In 1982, he finished fifth in the 500 and was leading Road America on the last lap when he ran out of the fuel – the closest Hillin ever came to victory lane in an Indy car.

One of the more honorable owners of any era, Hillin exhausted his bank account trying to win in Indy car but made good on all of his debts by early ’83.

“I think he got led down the primrose path by a few people who told him he needed to have his own car,” said Jones. “He would have been fine just sticking with me, Donnie Ray and a Wildcat or Lightning or Eagle.

“But he was a racer, and I’ll always be thankful for what he did for my career. I was a sprint car driver who got to run Indy and didn’t have to bring any money. You can’t say that any more.” 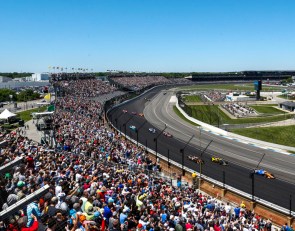